June 06, 2016
30 Days Wild, day 6: I've been checking nest boxes with a BTO bird ringer who is also a member of the Allerthorpe Common volunteer group, which I coordinate. We checked boxes in two areas of the common, the Yorkshire Wildlife Trust nature reserve and a private reserve nearby. My colleague checked the boxes and ringed any chicks that were ready, while I wrote down cryptic notes that he dictated, such as '2 GT 3+FL AV' or '8 BT NL slug'. I'm slowly working out what it all means. 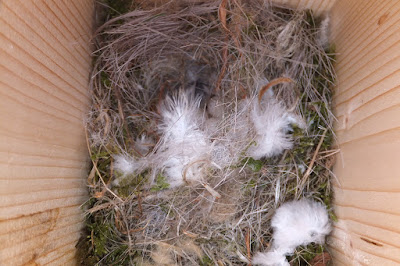 The YWT reserve has 10 boxes which I made last year. All seven tit boxes were occupied this year, but none of the three open-fronted boxes. All was going well when the boxes were checked ten days ago, but then last week we had a very cold north wind and temperatures barely got into double figures for several days. 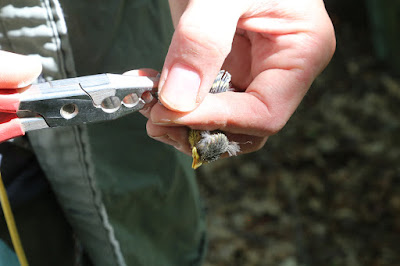 Four boxes had dead chicks in them, one of which was a total loss while the other still had some chicks living. We removed the bodies and recorded their ring numbers.

The other reserve has 21 boxes, 19 of which have been occupied this year by either blue or great tits. They seemed to have fared better, perhaps because there are more mature oak trees which provide most of the caterpillars. Three boxes had incomplete nests and two contained dead chicks.