December 28, 2015
Watching Gordon Buchanan's excellent series has brought back memories of the month-long trip I made to the Democratic Republic of Congo in 1987, though it was called Zaire in those days. We saw the Grauer's gorillas in Kahuzi-Biega before travelling on to Rwanda and the Mountain gorillas of the Virunga Mountains. Here's an extract from my diary, of the time at Kahuzi-Biega:

Wed 29th July: Got up at six to go gorilla trekking. After a hard climb up a steep hillside we stopped at the place where the gorillas had been seen the previous day. We found a small chameleon. We then carried on through the forest and found gorilla dung and nests used the previous night. Twice we heard gorilla alarm calls and some chest beating, but never saw the gorillas. Gave up about 3:30 and returned to camp - six hours hunting without success. 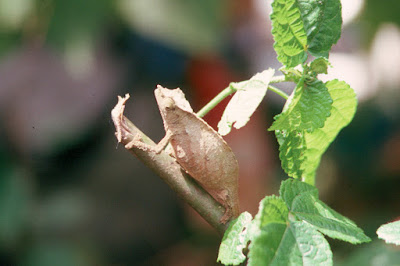 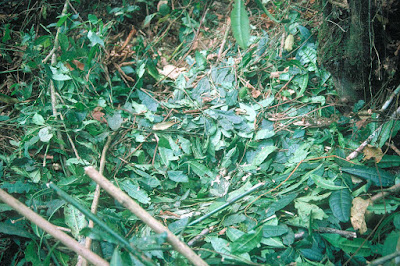 Gorilla nest, used the night before

Thu 30th: Got up at six again and walked to the park headquarters for another attempt to find gorillas. This time we were heading for a different group. After ten minutes' walk we were led down a track into the forest and within five minutes we came face to face with an enormous silverback gorilla. He walked around a bit and then sat down, leaning against a tree trunk. The trackers cleared the foliage obstructing our view of him and after a few minutes he sat up and looked at us. It was too dark in the forest to photograph him without flash, but the guide said it was OK to use flash and the gorilla did not react at all as we took our photos. 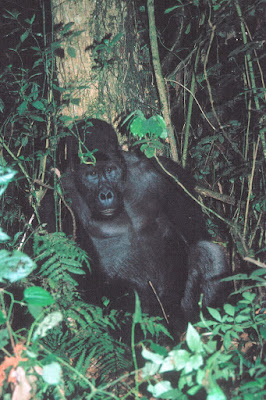 The silverback leans against a tree

After a few more minutes he lay down on his chest, facing us. A baby left its mother in the bushes behind and came over to the silverback. The baby climbed over the male's back and swung from a vine overhead. It then did some chestbeating and lay down on its father's back. After half an hour we had to leave them and returned to the park headquarters.

I do hope that infant has survived the years of war and is now a mighty silverback himself. 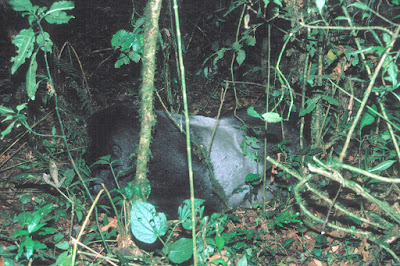 He lies down, totally relaxed in our presence 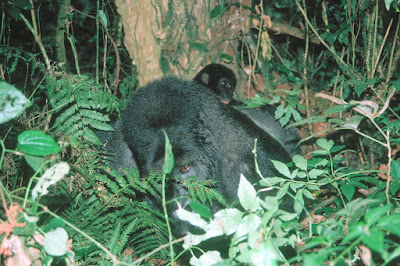 A youngster climbs over his back 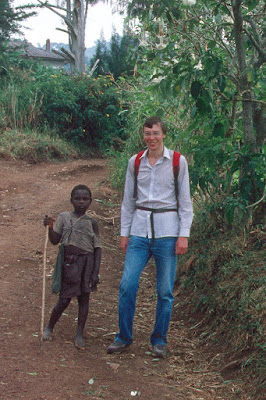 Me and my guide in Kahuzi-Biega