Conservation volunteering in the Maldives – part 3

March 09, 2015
Continuing the story of an amazing two weeks on a beautiful island in the Maldives, where I volunteered as a research assistant for the Maldives Whale Shark Research Programme.

Monday 23rd February:
Today was bright and clear with more wind, so better sea conditions for whale shark spotting, but very hot on the roof of the boat. We saw an HBT (Hawksbill Turtle) within minutes of leaving the harbour and another five during the day. We recorded 15 vessels, though I’m still having difficulty knowing my RDD’s from my LVBDD’s (Resort Dive Dhoni and Liveaboard Dive Dhoni). We passed Maamigilli and were about to set up a data logger when the captain received a message that a whale shark had been sighted off the next island. We set off at full speed (rather slowly in our traditional dhoni).

When we arrived there was another boat with snorkelers in the water and others were approaching. We went into the water quickly and for a minute I could see nothing. Just when I thought I’d missed it, there it was – a whale shark heading straight towards me! It passed beneath me and I turned to fin after it. I was immediately overtaken by all the other snorkelers, desperately trying to keep up. 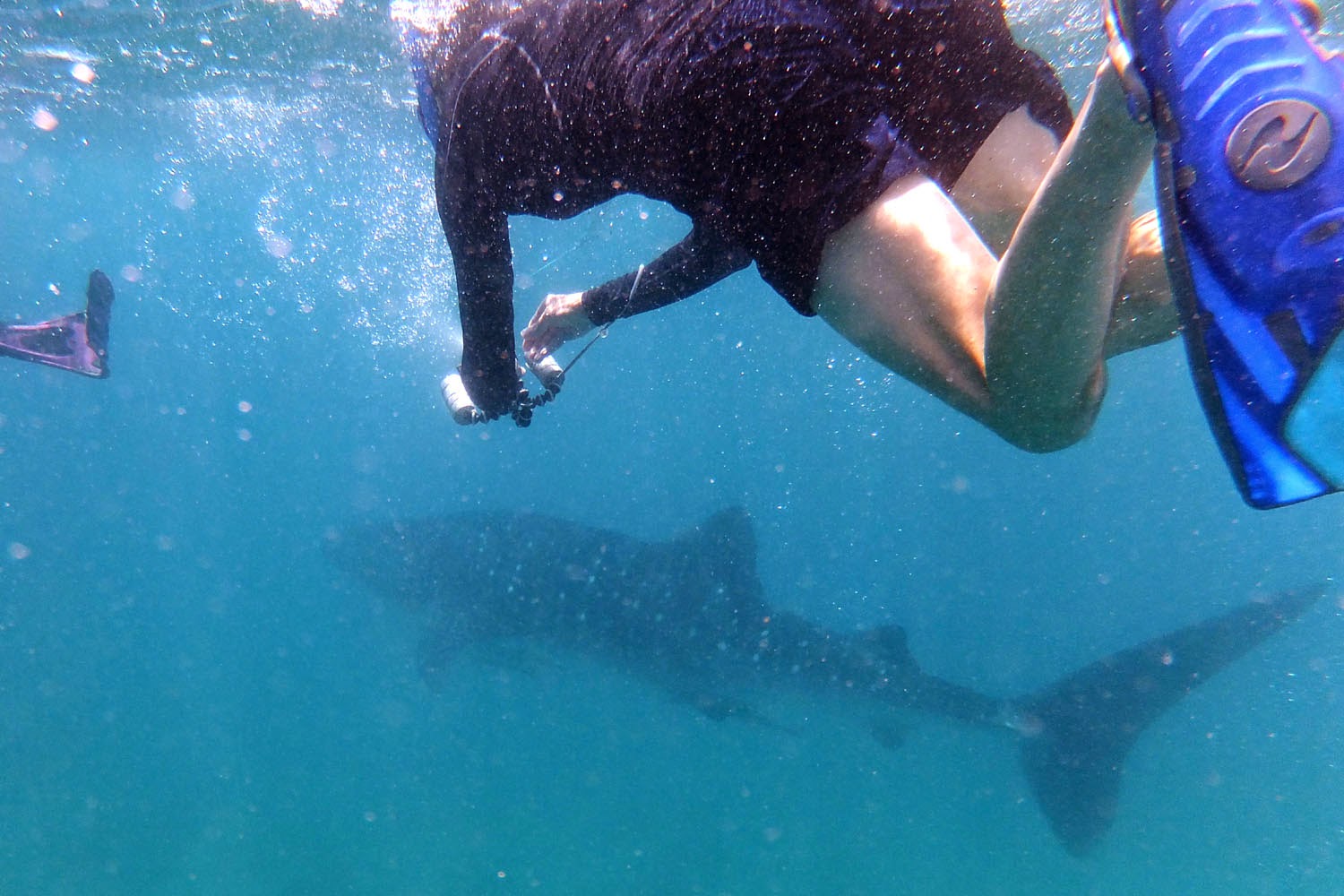 We returned to our boat and the captain took us up ahead of the shark, where we dropped back in for a second encounter. Once again I was searching, searching and seeing nothing, then suddenly it came into view, passing in front of me. I finned as fast as I could to keep up, but it soon pulled away and disappeared into the blue, pursued by other, fitter snorkelers. 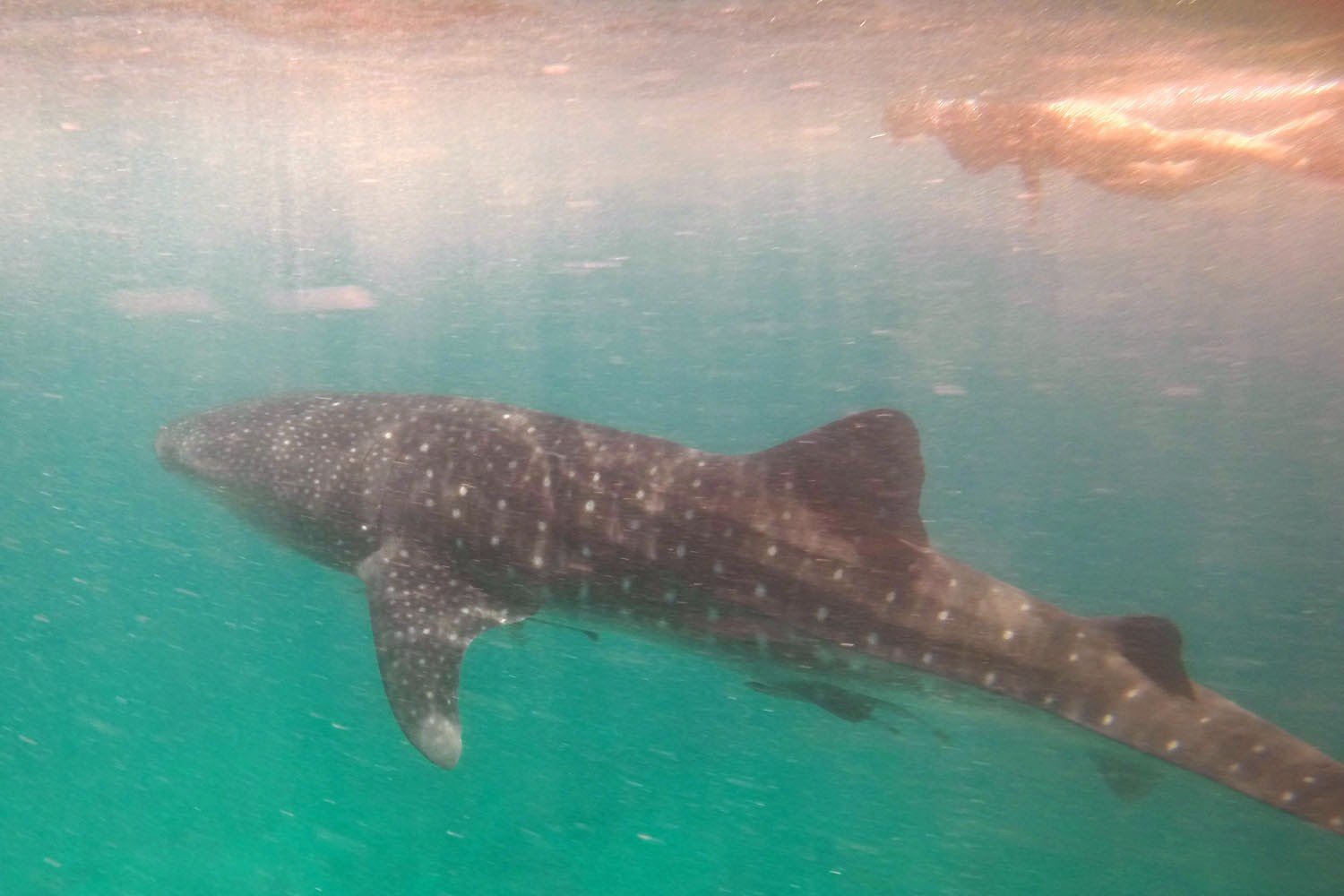 Back on the boat, I was amazed to see Katie’s photos of specific parts of the shark, showing the area behind the pectoral fins used for identification, and the injuries it had received from boat strikes, around the eyes and behind the dorsal fin. When we left, there were six other boats present and 41 people in the water – it was mayhem. 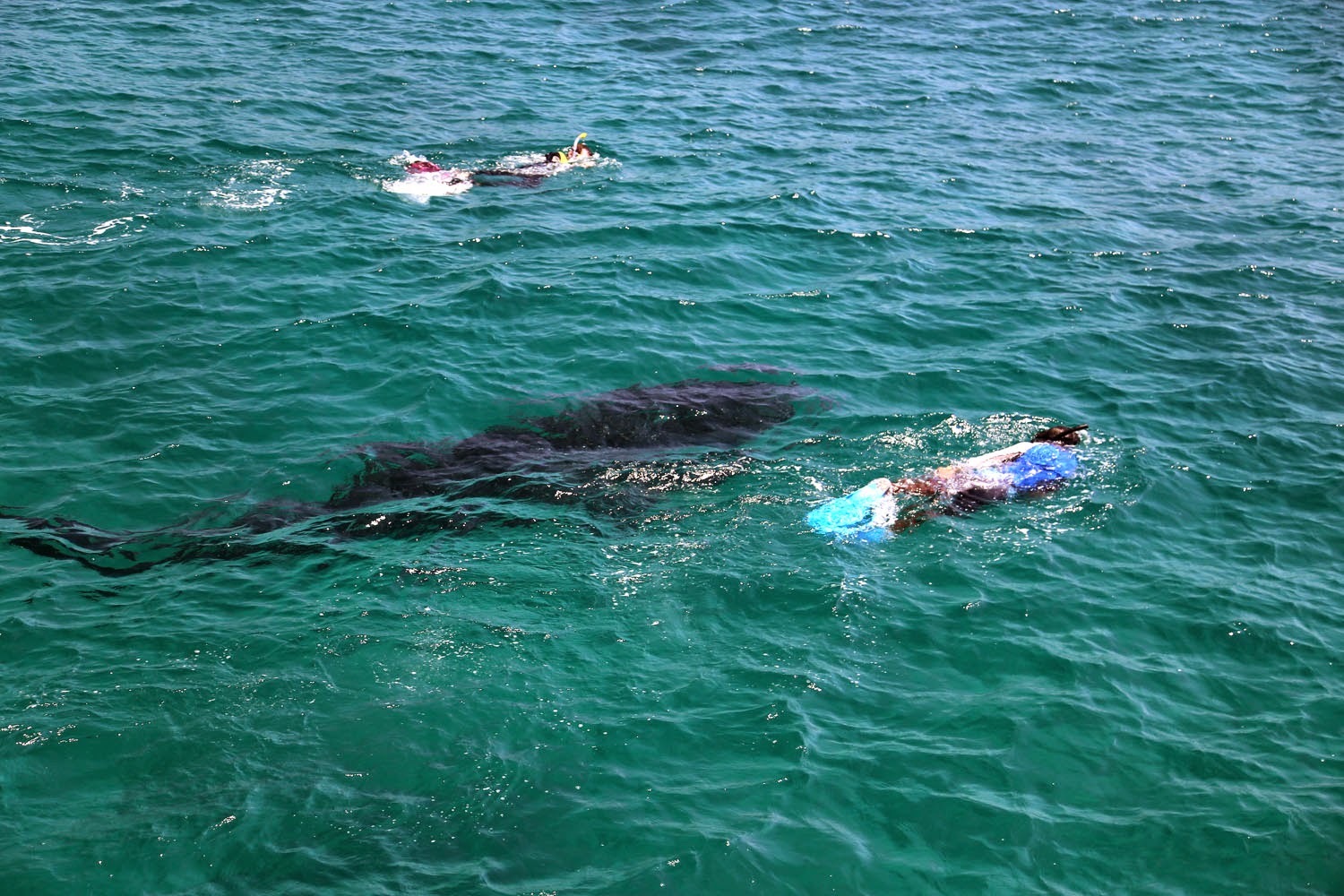 We returned to the data logger site, where the researchers used GPS to find a specific rock on which to attach the device. It’s about the size of a matchbox and will be left there for a fortnight, recording the water temperature and light intensity at hourly intervals, before being located again and recovered. It provides a measure of the health of the reef. I was amazed at the depth they were able to free-dive down, to attach the device to the rock. 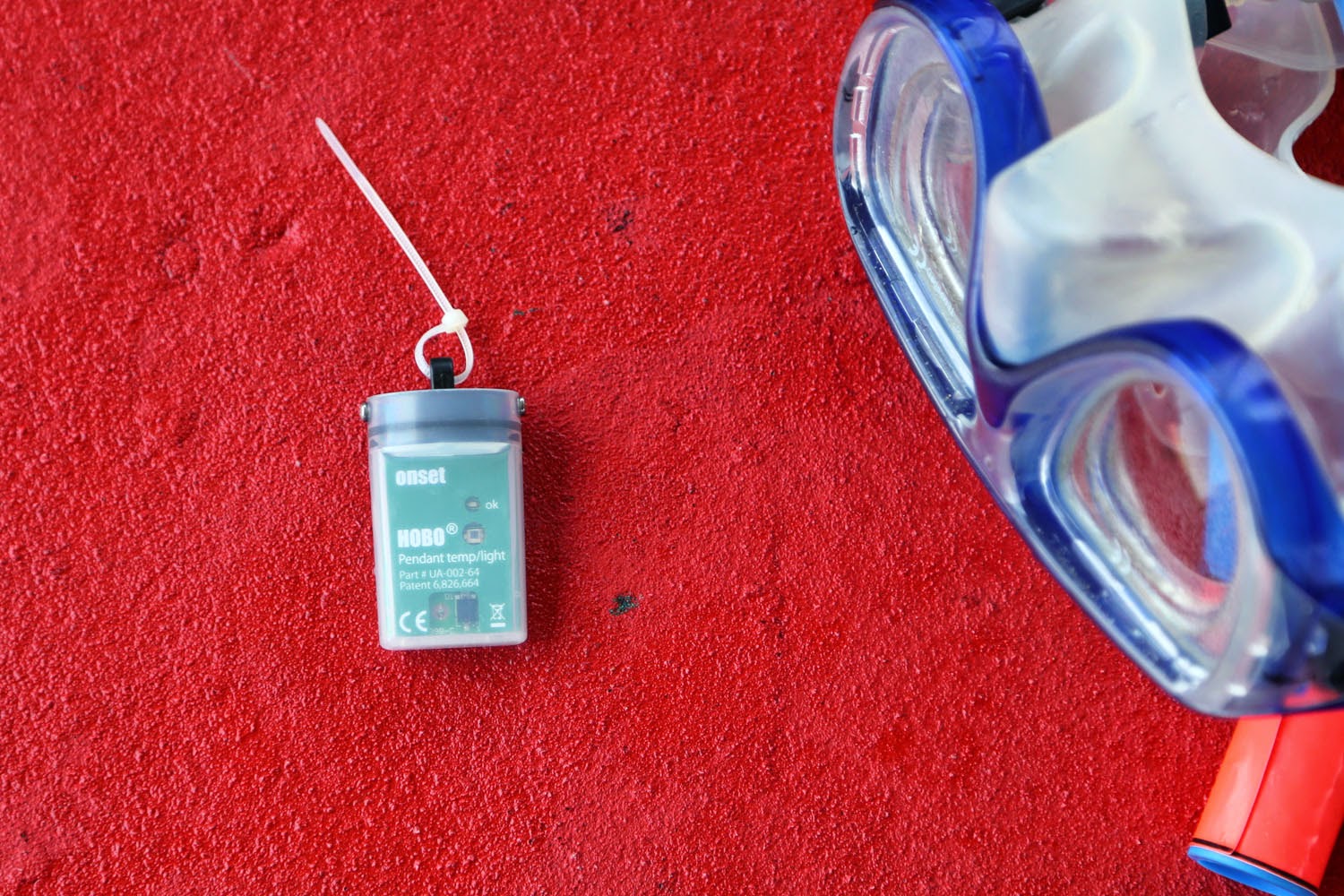 Back on the boat, we got underway again and within a few minutes saw a zebra shark at the surface. Minutes after that, I was astonished when another whale shark was spotted. This one was bigger and travelling faster. We got in the water, but it was immediately ahead of me and I had no chance of catching up, or so I thought. The crew threw a rope out at the stern and Shameel and I grabbed it and were towed along. Soon we had the whale shark underneath us. It would descend into the depths for a while, then appear again, keeping in the shadow of the boat. Katie joined us on the rope and for 20 minutes we drag snorkelled with this amazing 6.5 metre whale shark. It was one of the most incredible experiences of my life. 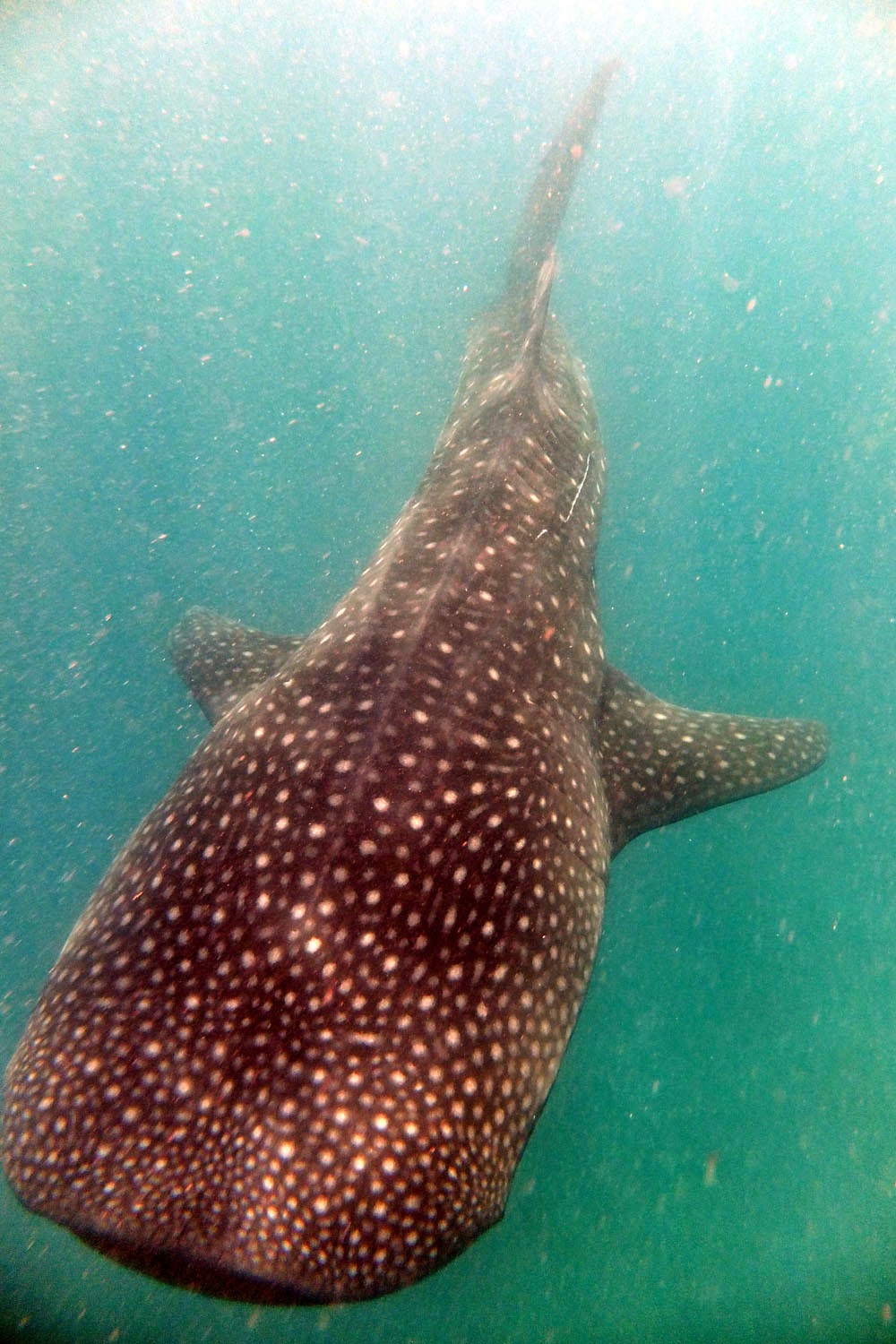 The team immediately recognised this individual, from the pattern of propeller blade scars on its back – this was ‘Andy’, or officially WS108. In the evening we used software called I3S to compare ID photos taken today with those on the whale shark database. This confirmed Andy’s identity and matched the first whale shark we saw as WS224, a younger male at about 4 metres in length.