Conservation volunteering in the Maldives – part 2

March 07, 2015
Continuing the story of an amazing two weeks on a beautiful island in the Maldives, where I volunteered as a research assistant for the Maldives Whale Shark Research Programme.

Thursday 19th February:
Katie was back with us today, having been away for a few days. We headed north-westerly, across the atoll, on mirror calm sea again. There was little cloud this morning, so it got very hot. Flying fish took off every so often, alarmed by the boat. They fly an amazing distance. After about two hours cruising, we reached the island on the other side. We saw eight spinner dolphins, spy-hopping as we passed them. We reached the reef, where there were dive boats with their divers in the water, and we had a snorkel. Although the visibility was good, the water was too deep to see very much apart from divers’ air bubbles coming up.

We then kept watch on the roof of the boat until lunch time. I stayed down after that, as it was ridiculously hot up there. Katie and Shameel took ‘environmental variables’, using a Secchi disk to measure the visibility and an apple to measure the current. The exact position of the apple is recorded with GPS, then after at least three minutes, it is recorded again. The two GPS readings and the exact time between them are used to calculate the strength and direction of the current. 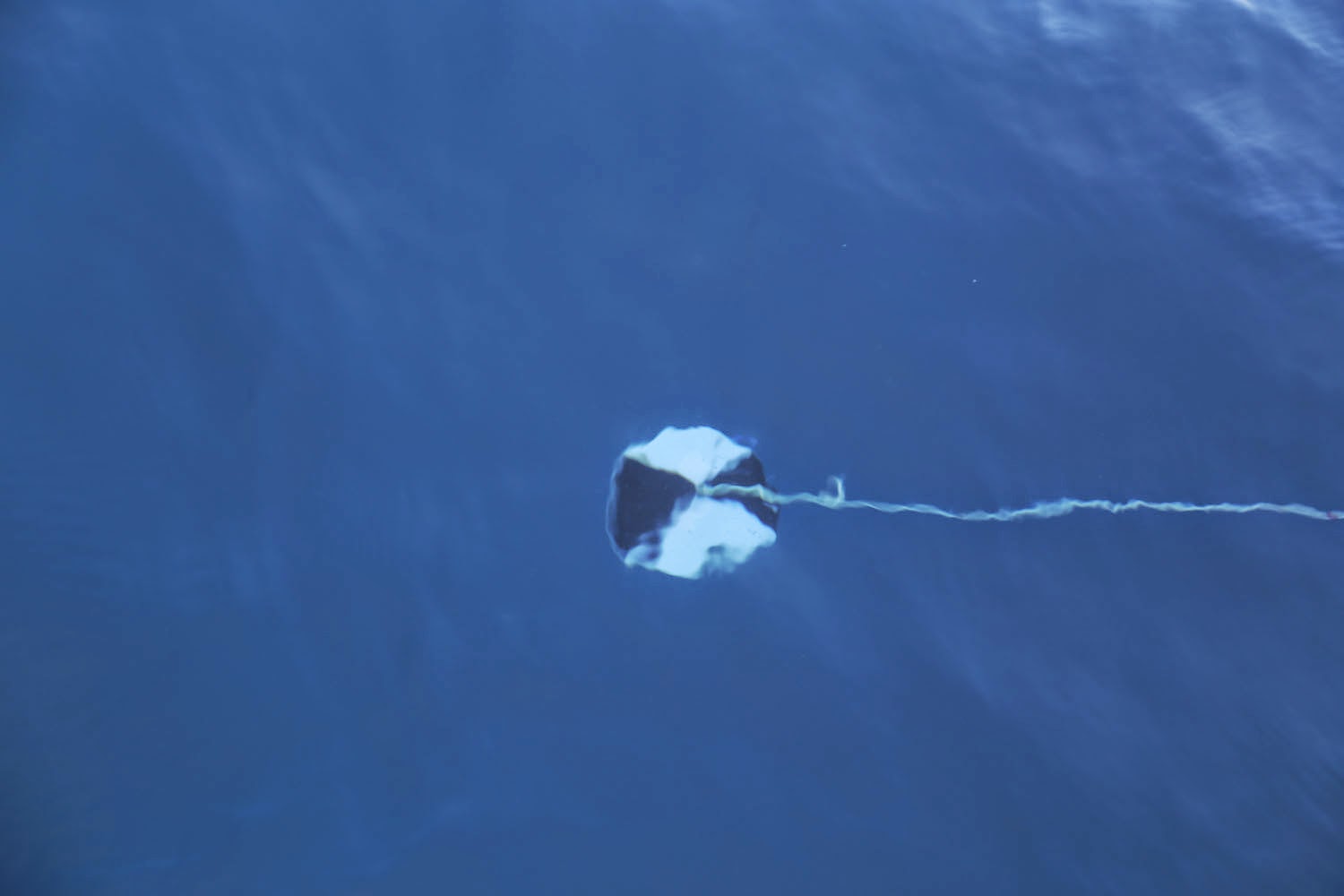 The Secchi disk sinks into the depths 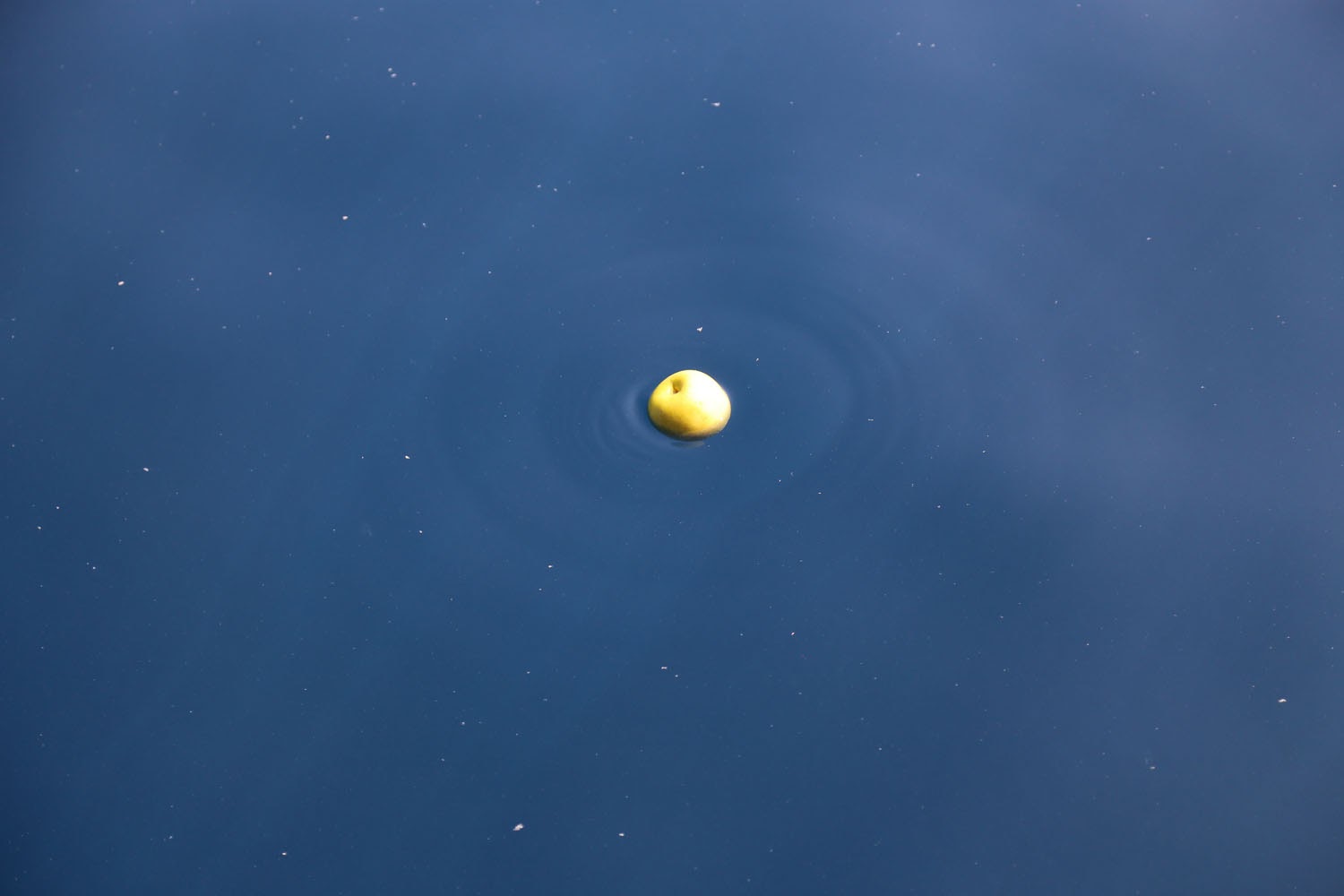 An apple measures the current

Passing Maamigilli, I saw a splash in the water, far off. We headed towards it and found a pod of about 40 spinner dolphins, which appeared to be travelling in two separate groups, just a few metres apart. 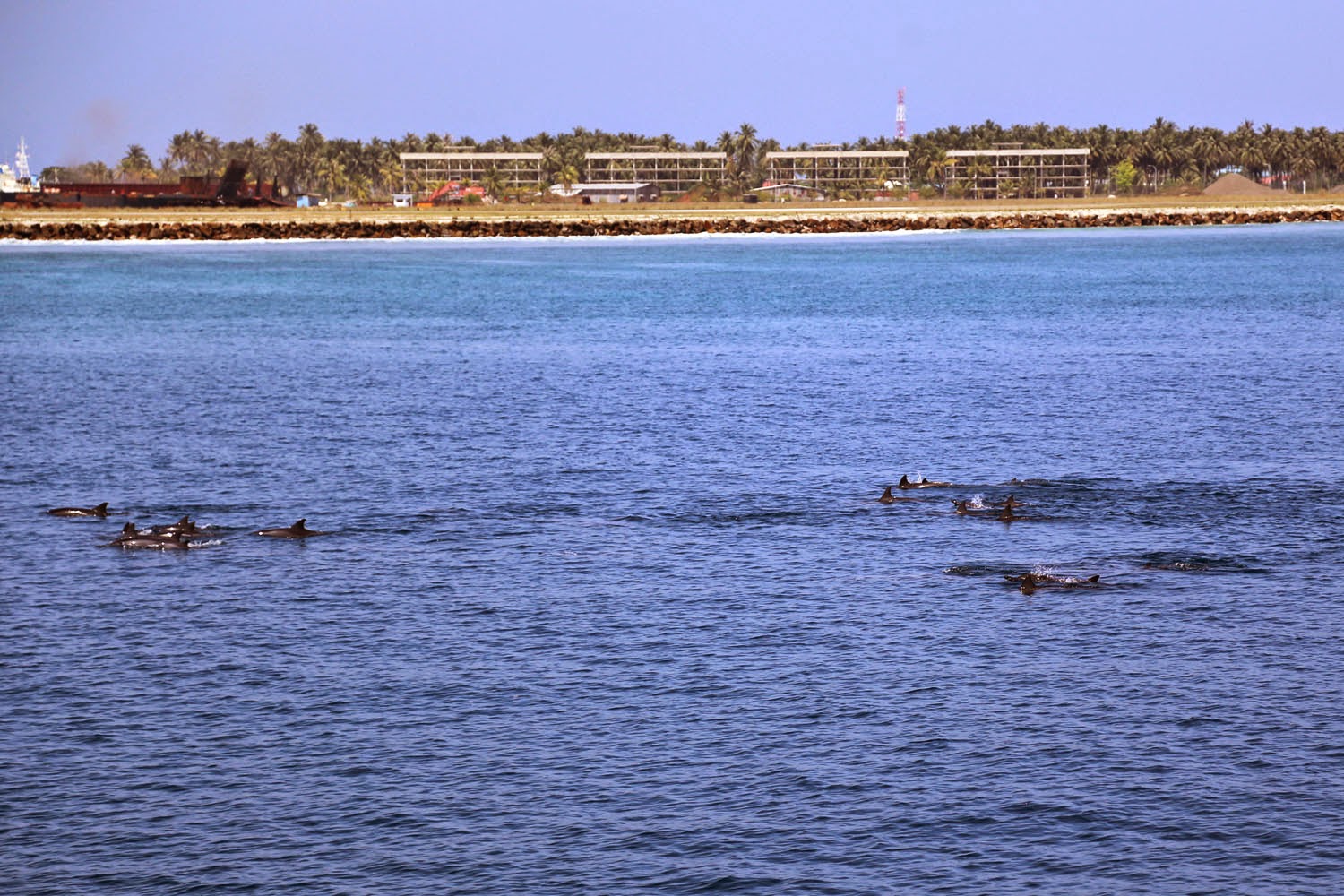 Spinner dolphins beside the airport

We continued on to the Dhigurah reef, where we drag snorkelled again. Katie saw a large turtle and we both duck-dived to get closer to it. I still couldn’t see it as it was on a coral outcrop, well camouflaged and didn’t move. Finning back to the boat, we passed through a large shoal of vivid blue fusiliers. We’d seen large shoals of bannerfish and parrotfish again. We returned to Dhigurah and I went down to the beach to photograph hermit crabs and fruit bats, though I failed to get a decent shot of any of them. 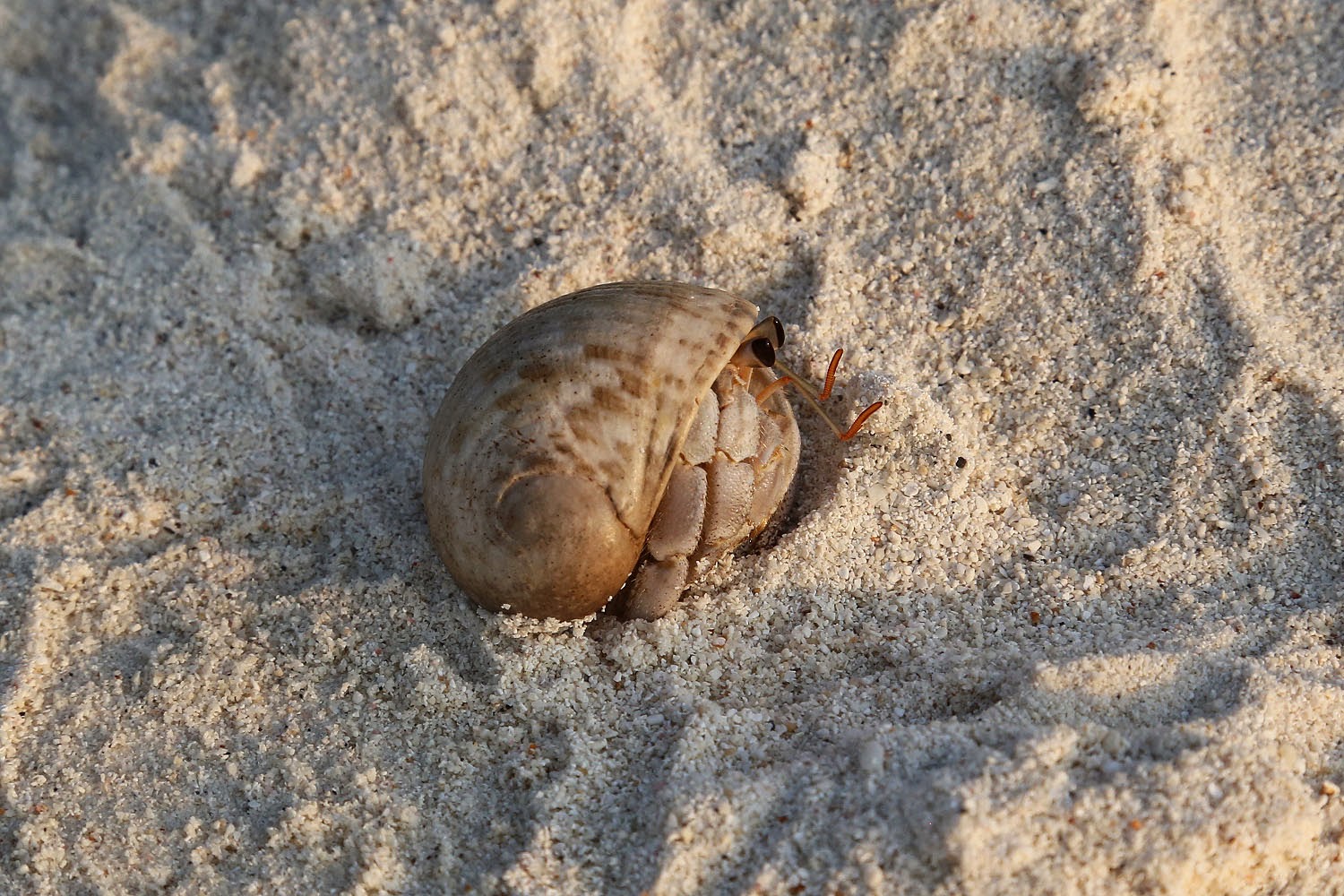 Fri 20th:
Today is a day off from the project. I had a walk around the town, trying to get my bearings – literally, as I used my GPS to map my route. I then took the dirt-track road that runs down the southern end of the island, with deserted beaches on either side. I sat on a narrow strip of sand and had a brief swim, but had to leave as the tide was coming in and my beach disappearing. 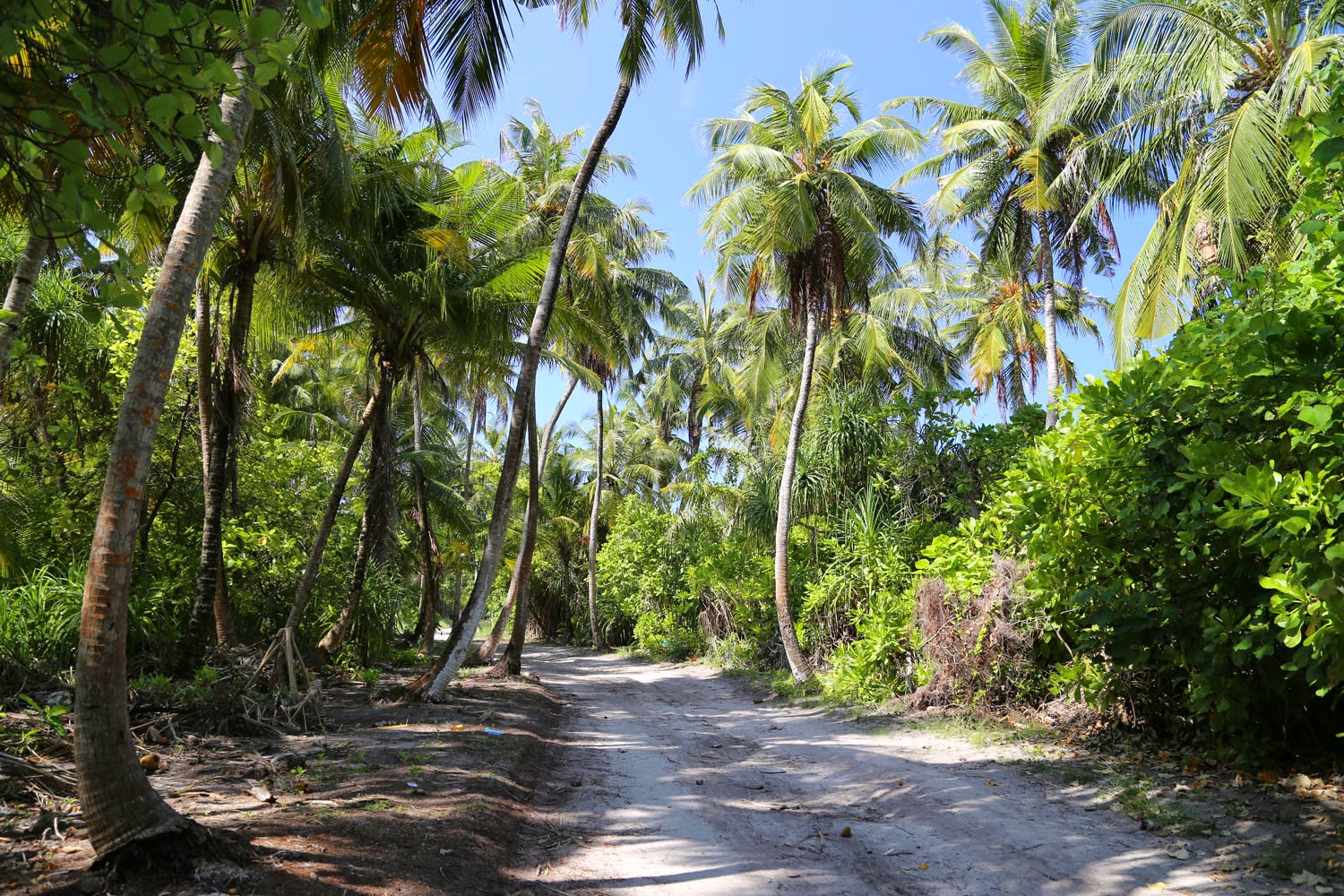 The track through the forest

In the afternoon I attended a beach clean organised by the TME guest house. We were taken in a pickup truck down the track I’d been along in the morning, and issued with gloves and old cement sacks. About 30 people cleaned half a mile of beach, collecting a vast number of plastic bottles, bits of polystyrene, flip-flops and other assorted rubbish. A little girl found a $1 note. It was good to see everyone working together – TME management and staff, guests of all nationalities, the dive centre and MWSRP staff and locals. 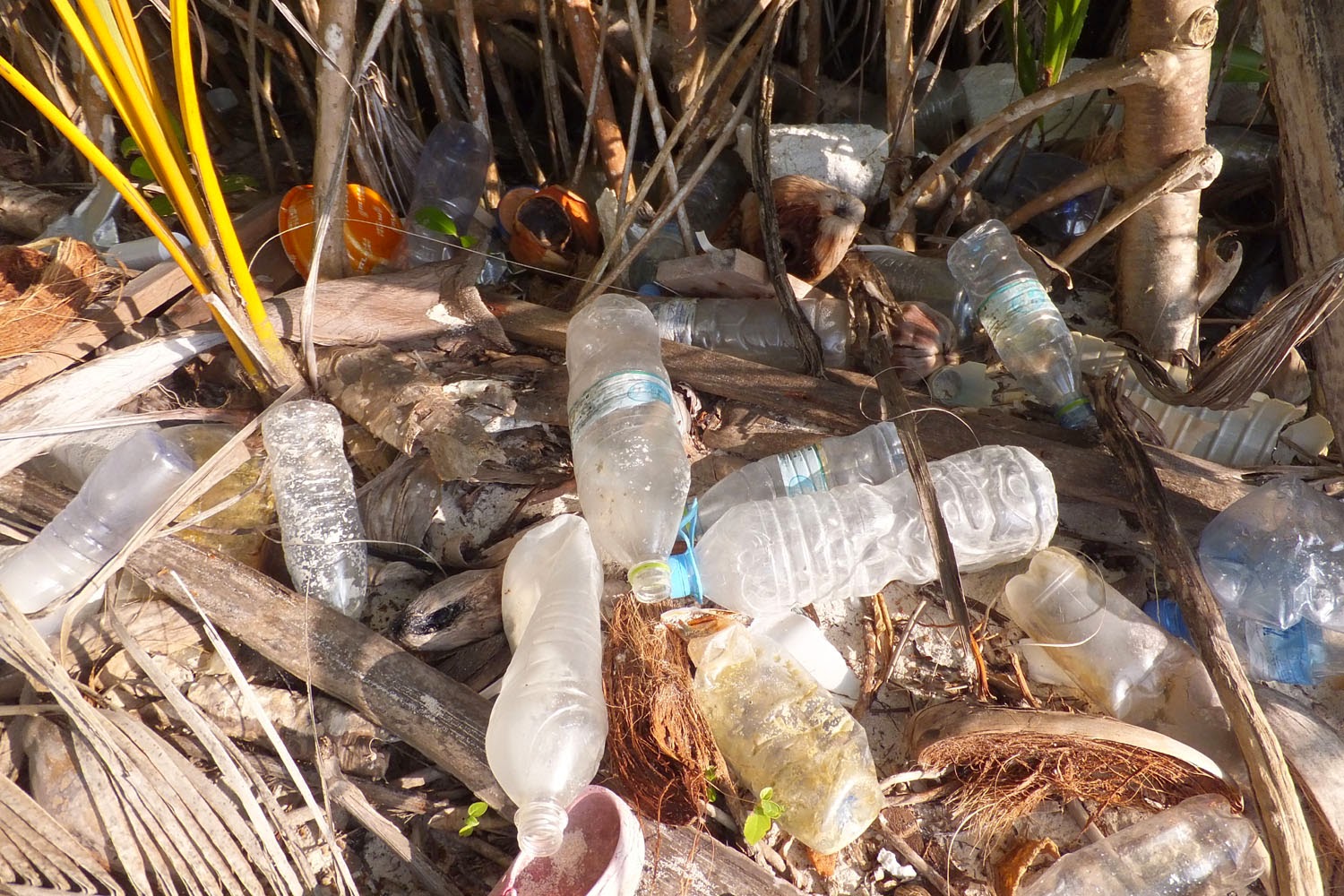 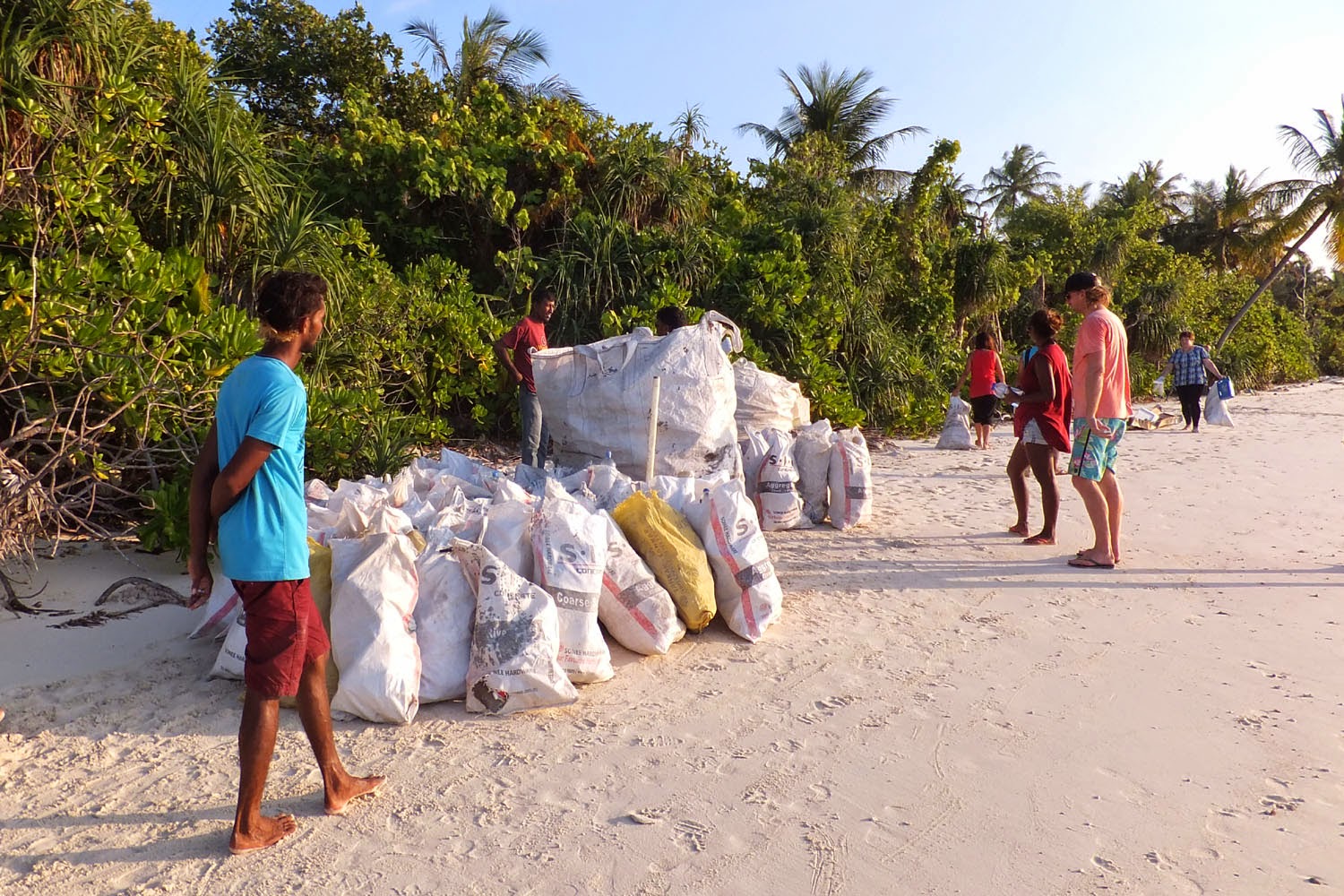 A huge pile of rubbish 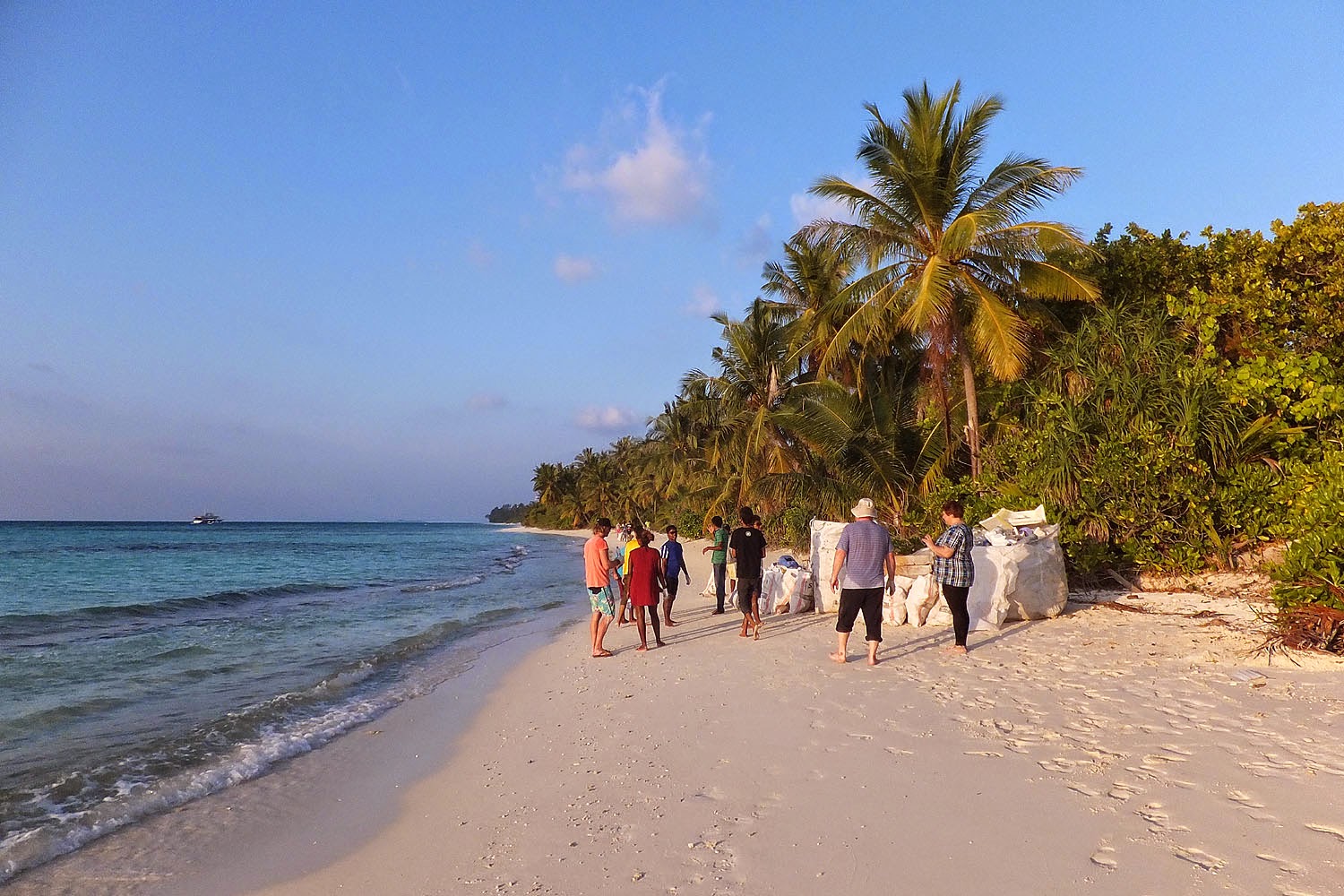 Sat 21st:
Today was another day off from the project, but I’d booked a ‘whale shark safari’ with the local dive centre. There were 16 passengers, eight of them divers. Before we set off, the dive-master gave us a briefing on whale shark etiquette – keep your distance and on no account touch the shark. There may be 100 snorkelers in the water trying to see it, he said, so watch out for kicks in the face which can dislodge your mask. The sea was very rough when we came out of the harbour, but it wasn’t too bad once we got under way. We cut across the inside of the atoll towards Maamigilli. After about 20 minutes, the crew on the roof spotted a manta ray. We jumped in and swam flat out in the direction it had been last spotted, but there was no sign of it. I got left behind, but one of the crew then spotted the manta behind me and everyone reversed direction. I saw it gracefully glide off into the depths as the clumsy snorkelers approached.

We got back on board and cruised to Maamigilli, where there were several more boats. We could see a manta swimming towards, and then amongst, a group of snorkelers who must have had an amazing view of it. We snorkelled over the reef here, but the water was too deep to see much. The divers had a better chance, but reported nothing spectacular. We cruised back towards Dhigurah, stopping at the adjacent island of Lux, to snorkel over the reef. Here it was better, with shallower water, good visibility and lots of fish.


The reef is teeming with fish

We returned to harbour in Dhigurah, without finding a whale shark. After dinner I met Katie on the beach and we tried to do a time-lapse of the stars. It was difficult to set up and I only got a short sequence of photos before going to bed, too tired to continue. 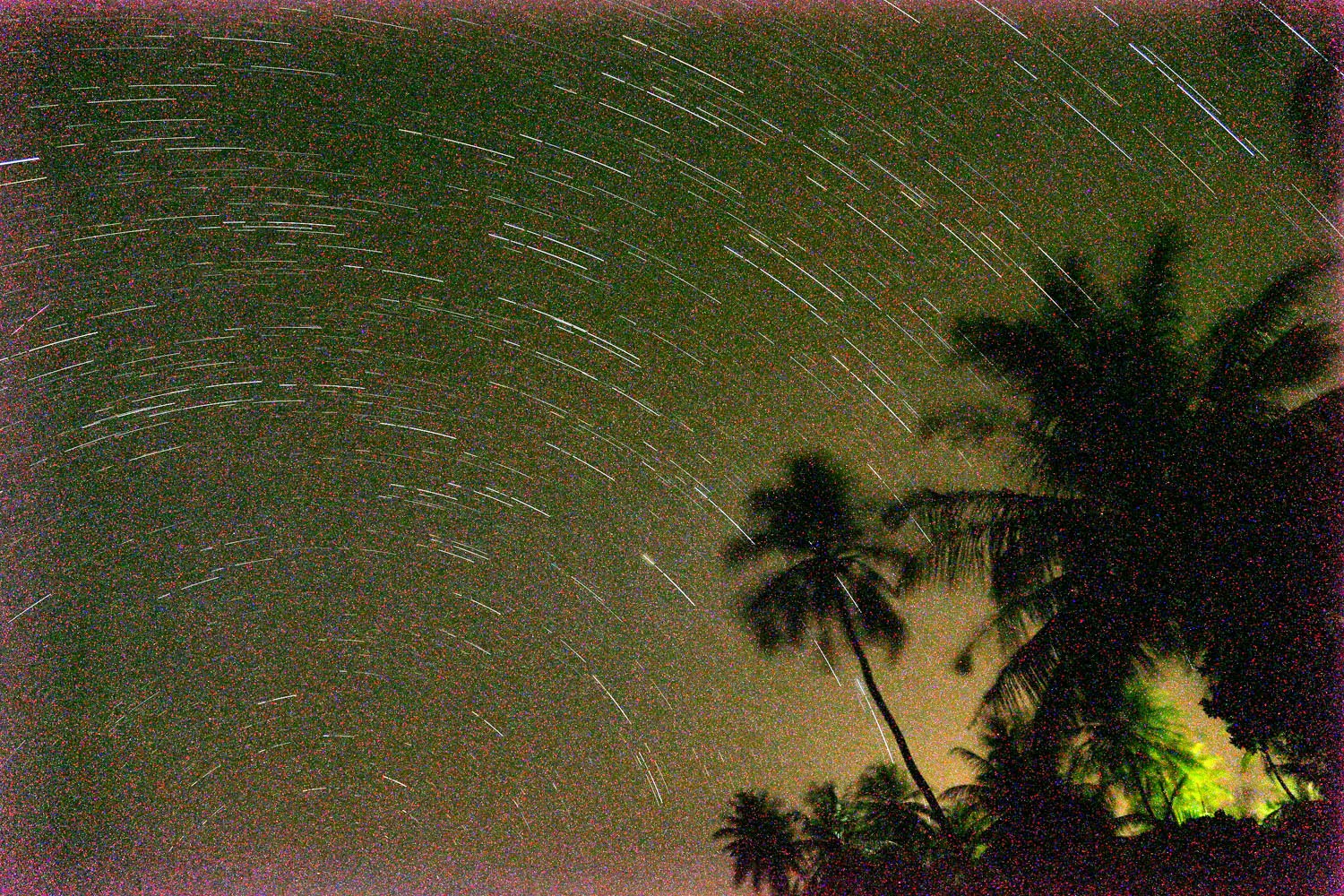 Sun 22nd:
Before breakfast I went out to try and film, or at least sound record, the Asian koel which is a type of cuckoo. I found one in a clearing in the forest and got a brief shot, but from too great a distance with only a 105mm lens.

It was still rough when we left the harbour and got into open water, but not as bad as yesterday. Within about 10 minutes we saw a hawksbill turtle and shortly after that, a large manta. Past Maamigilli, we altered course to a line parallel to the reef, but about a mile from it, as whale sharks had been seen in this area. The wind got up, but the sea was calm for a while. It got very hot on the boat roof as we recorded the vessel traffic, more turtles and some spinner dolphins. A shadow I thought was a manta was actually a shoal of fusiliers. After we’d turned around, the sea got rougher so I stayed on the deck for a while.

We stopped at the island next to Maamigilli to snorkel over the reef. We immediately saw two box fish, but the current was strong so I was swept away before I could get any photos. Further along the current eased, making it easier to duck-dive and get some pictures. There was an anemone with several clown fish and further on I found an octopus. Katie and I photographed it under a coral at first, then it moved to another hole and disappeared. 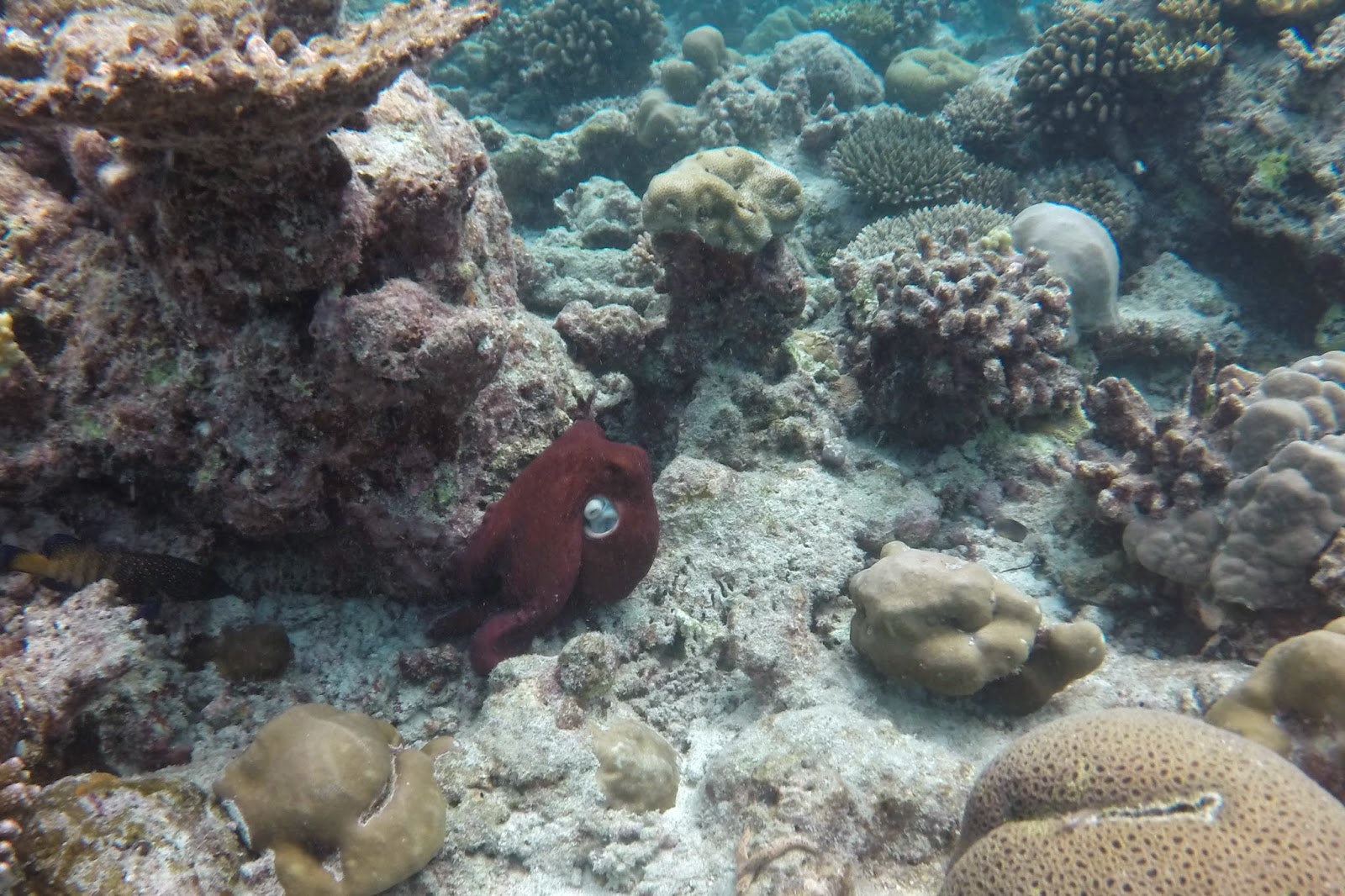 We cruised back to Dhigurah in rough seas again. After dinner I went back to the beach for another attempt at a time-lapse of the stars. The set-up was quicker after last night’s experience, so I was able to give it a full two hours. 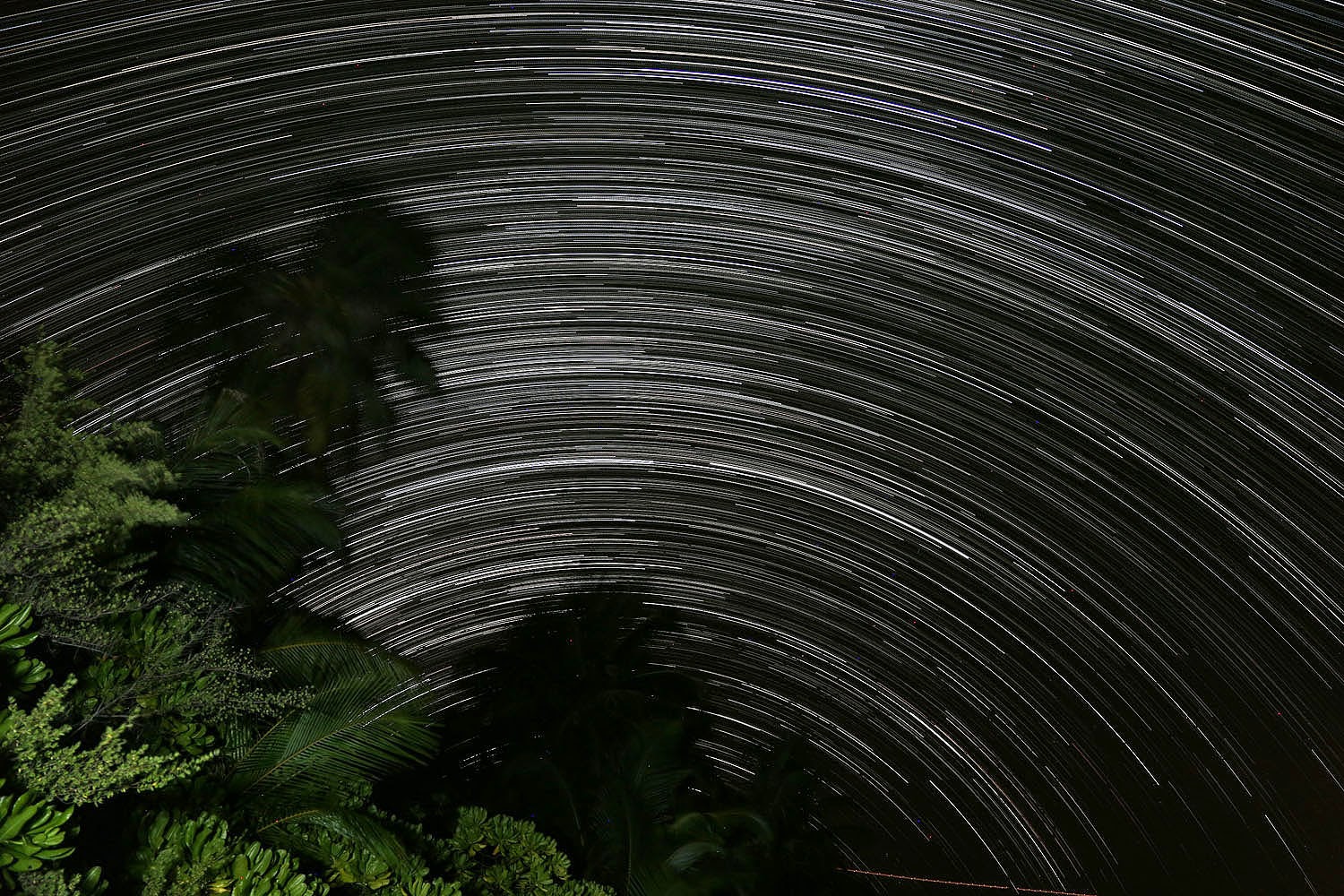 Movement of the stars over 2 hours 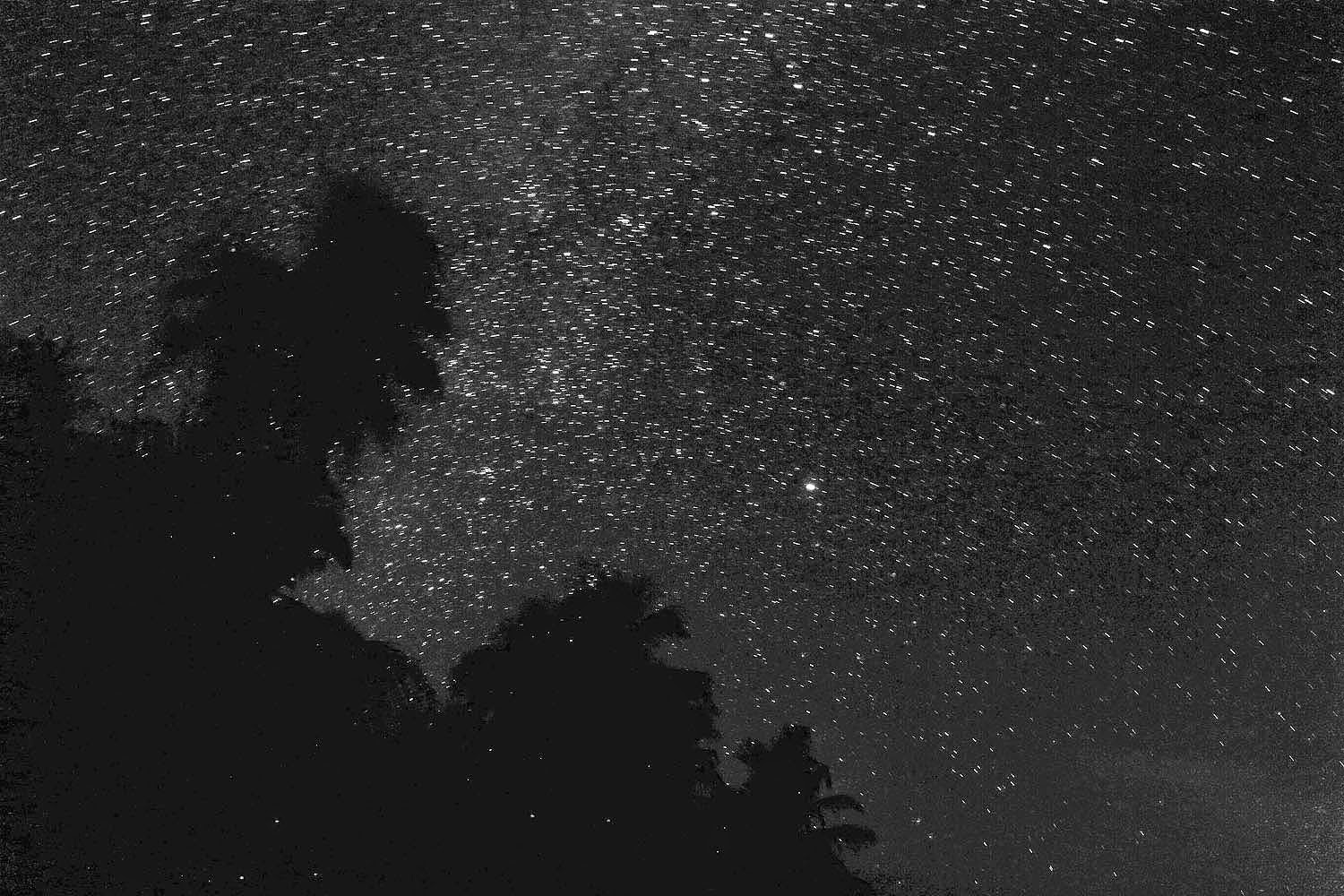 No photograph could do it justice