Conservation volunteering in the Maldives – part 1

March 04, 2015
For the last two weeks I’ve been on a beautiful island in the Maldives, volunteering as a research assistant for the Maldives Whale Shark Research Programme. 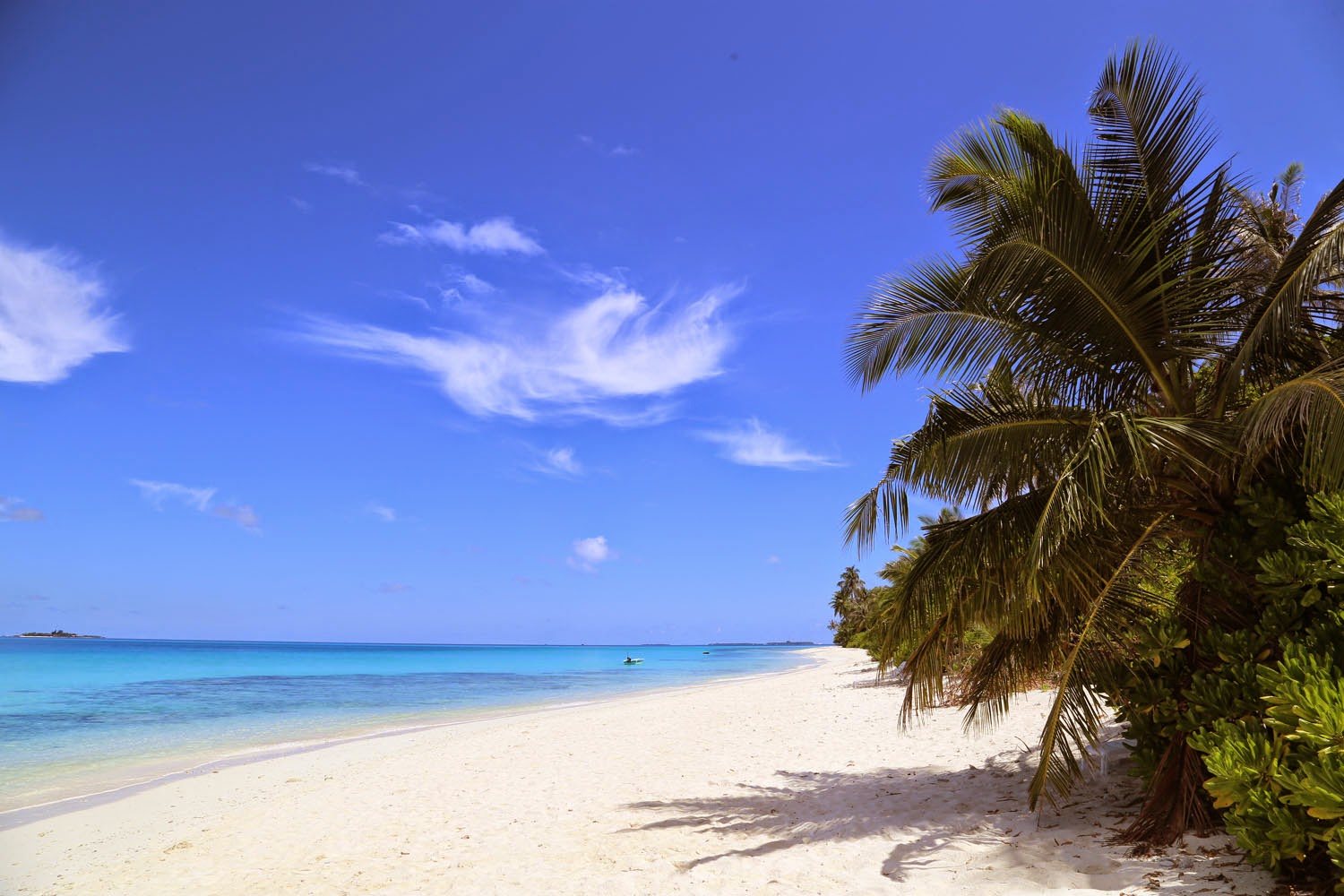 Dhigurah - an island of white sand beaches and palm trees


Sunday 15th February:
After three flights and a very bumpy speed-boat ride, I arrived on the island of Dhigurah, in South Ari Atoll. I met the project staff, Katie and Shameel, checked in at the TME guest house and had some time to recuperate before heading to the beach for a trial swim. The water was warm and clear and where there was some coral it was teeming with fish. Shameel swam for the Maldives at the Beijing Olympics, so he easily kept up with me even without fins. This was a test to see how confident I was in the water. I’ve been snorkelling since I was 10, so I had no problem. 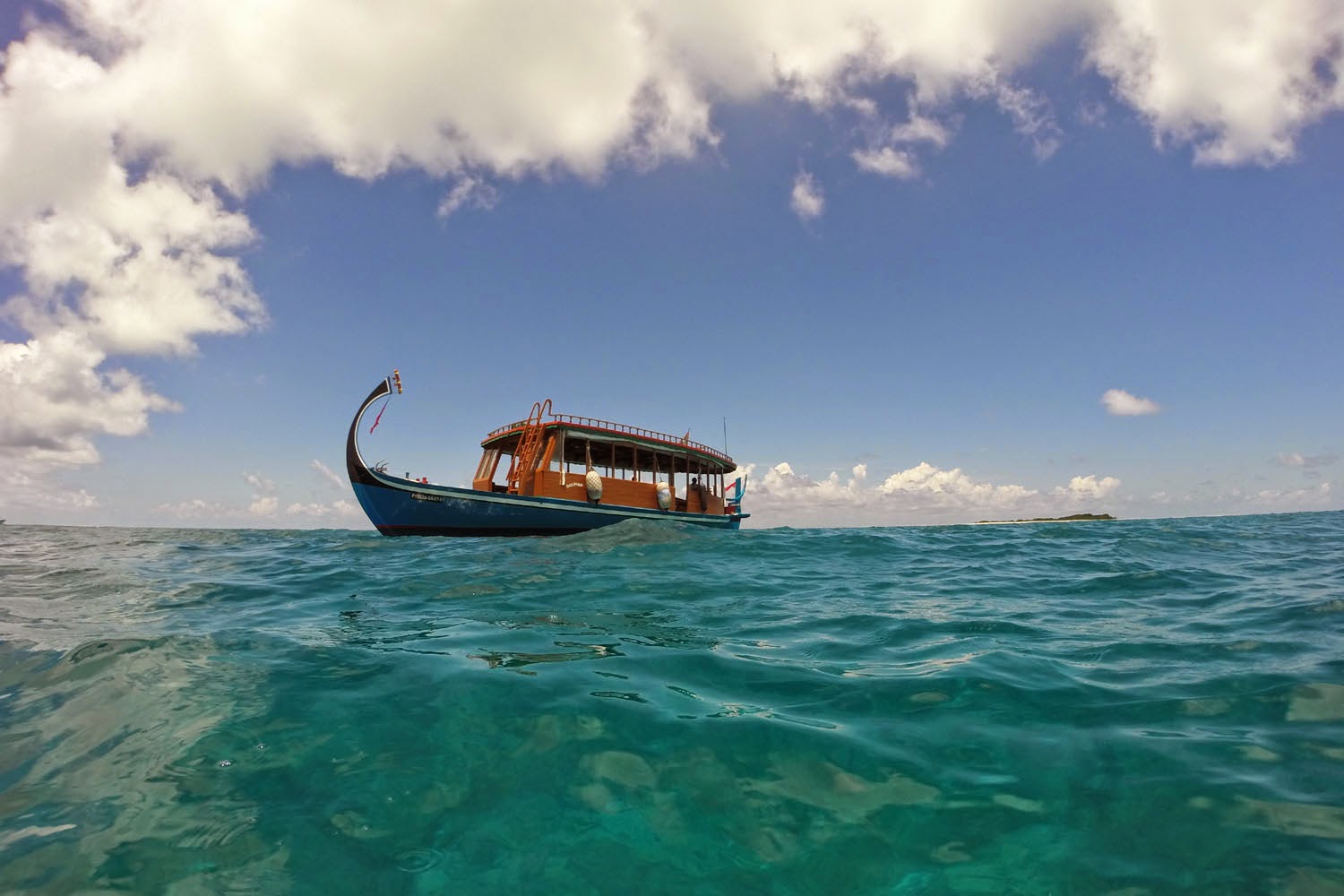 Our traditional Maldivian dhoni
Mon 16th:
After breakfast I met up with Shameel and Russell, an American working for USAID. We took a car to the harbour and boarded the project’s dhoni for a cruise along the south side of the atoll. We saw a hawksbill turtle just after leaving the harbour. Shameel showed me the forms used for data collection. As well as recording whale shark sightings, they record other megafauna (manta rays, turtles etc.) and details of the other boat traffic. Off Maamigilli, where my final flight had landed, we stopped to snorkel over the reef. The coral was in good condition and there were lots of fish – large parrotfish, surgeonfish (2 species), shoals of electric blue fusiliers, blue-striped snappers, sergeant major fish and lots more. On the way back, we saw three spinner dolphins which briefly came over to investigate us. After a couple of jumps out of the water, they disappeared again. We dropped Russell off at the airport harbour and cruised back to Dhigurah. In the afternoon, Shameel went through a presentation about the research programme, showed me the data entry software and went through the daily battery charging routine that I’m now responsible for. 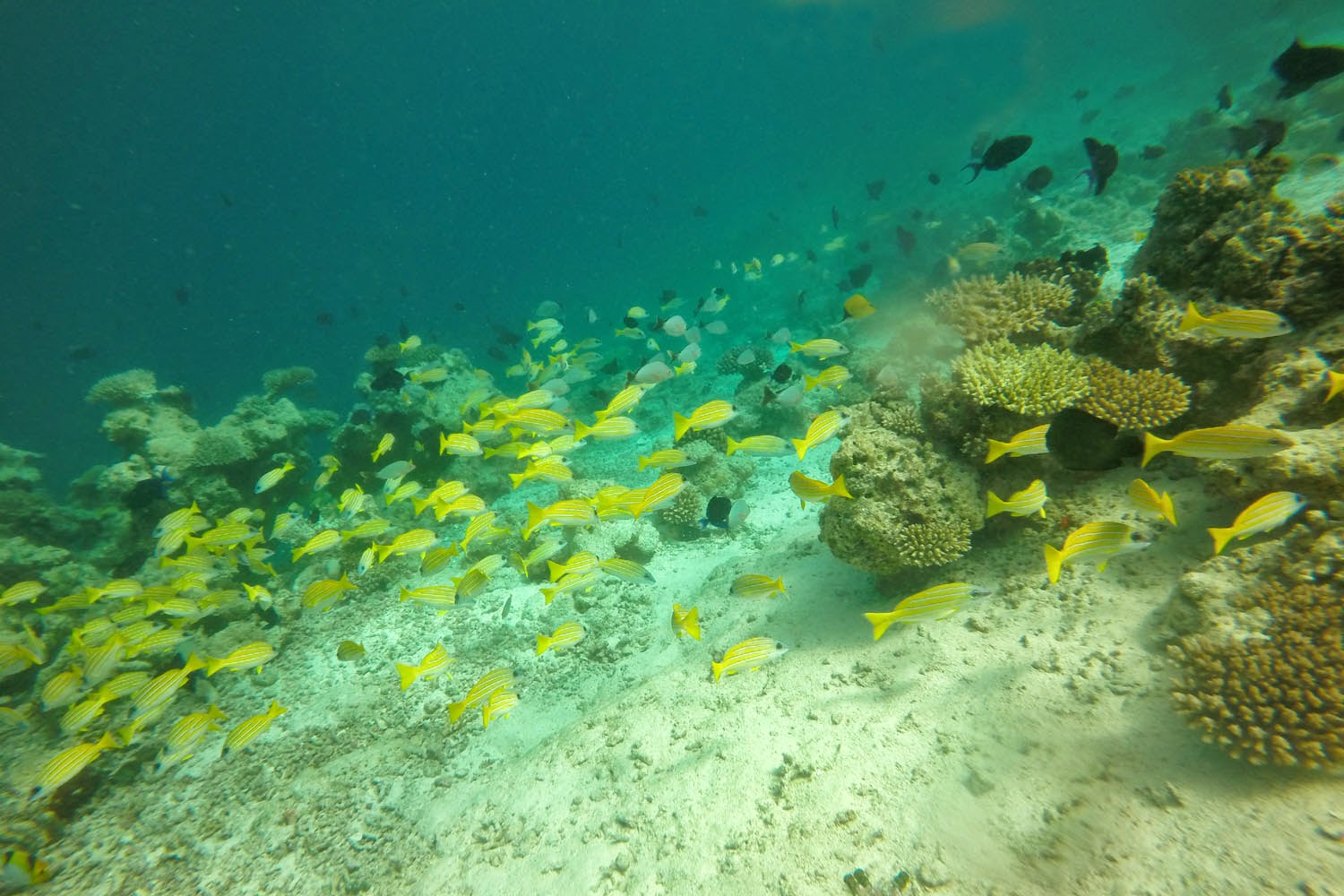 Blue-striped snappers
There are about 230 whale sharks in the programme’s database and they are almost all immature males. Nobody knows why they congregate here. There are also large numbers of mantas and cetaceans. What is it about this area that attracts them? Where do the whale sharks go when they reach maturity? The main threat to them is the resort boats – 67% have injuries from propellers. South Ari atoll is designated as a Marine Protected Area, though that currently provides little practical protection. There is a voluntary code of conduct for tourist boat operators and they are encouraged to report whale shark encounters through an on-line application called the ‘Big Fish Network’.


Normally, the programme has up to eight volunteers, but for the next fortnight I’m the only one. This is a great privilege, though I do have to carry out the work of eight people!


Tue 17th:
I met Shameel at the reception area, collected my packed lunch, and we took the charged equipment down to the harbour, through a maze of narrow streets. We set off in the dhoni along the inside of the atoll at first, then out at Maamigilli, where we were yesterday. We soon came upon a cluster of tourist boats, which all had to be logged. Only when we’d done the paperwork could we see what they were there for – it was a pod of six spinner dolphins. We continued along the reef, getting quite a lot further than we did yesterday, before turning about. Coming past Maamigilli again, we disturbed a shoal of small flying fish, which looked like the water was boiling as they took to the air. We stopped on the reef beside the next island and had a snorkel. We saw a large shoal of unicornfish, lots of powder-blue surgeonfish and large parrotfish. 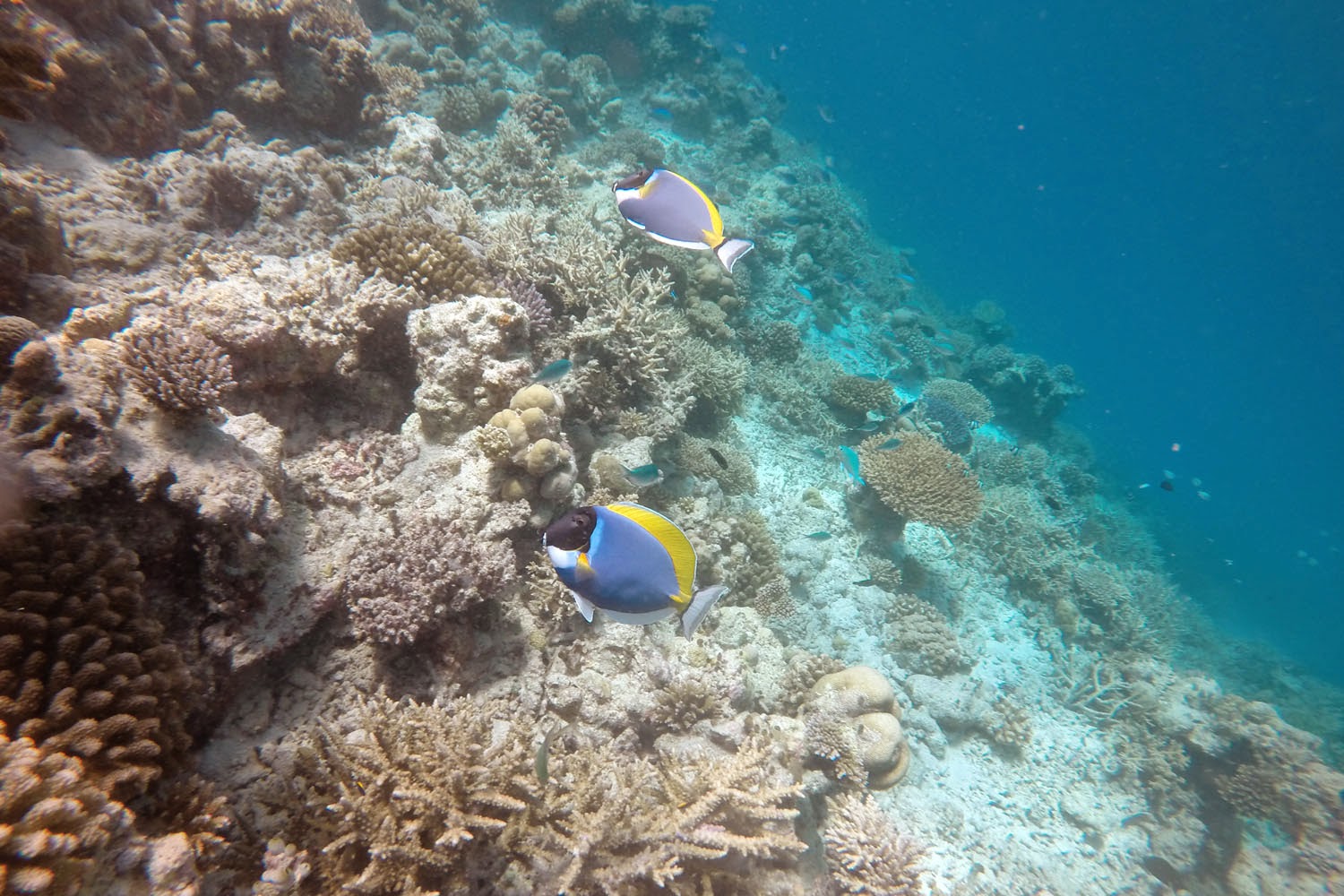 As we came out of the water, the tourist boats were gathering again nearby, as a whale shark had been spotted. It was gone by the time we reached the other boats and must have been a very brief encounter for them. We had our lunch on the boat, then slowly cruised back to Dhigurah. The sea had been flat calm all day.


Wed 18th:
We set off round the outside of the reef this morning, into an area good for manta ray sightings. Past Maamigilli there were lots of tourist boats, many looking deserted. In fact they were dive boats, with their divers underwater. I’m still useless at identifying the vessel types and even spotting the names on some of the boats. Counting the people on board and recording the time and GPS coordinates as well makes it a demanding job when several vessels come along at once. 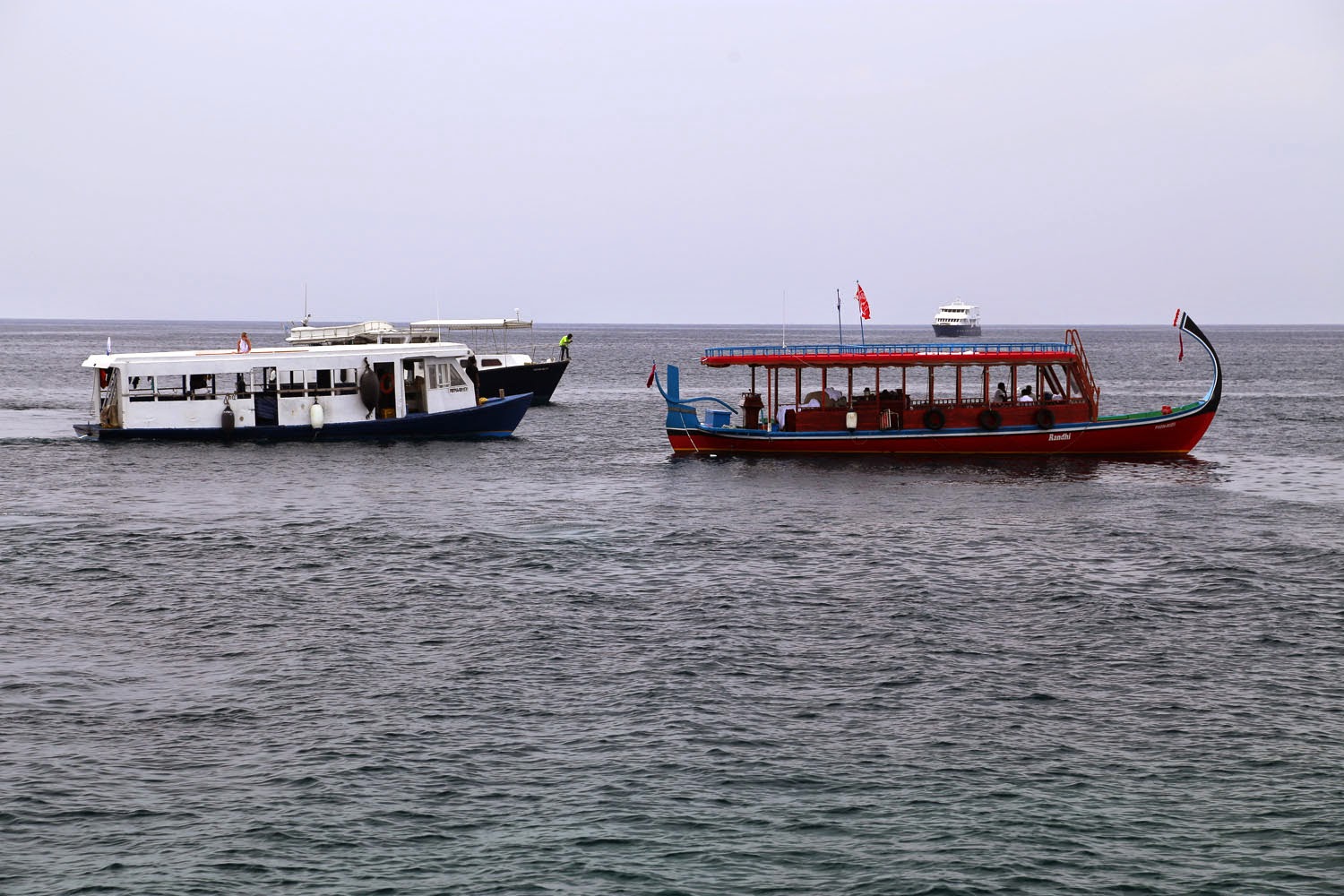 Recording vessels is not as easy as it sounds

We logged all the vessels, then continued on, over flat-calm seas. The surface was so mirror smooth that the reflected light prevented us from seeing into the water. We turned around and then drag snorkelled behind the boat. Shameel and I spent 1½ hours being slowly towed along. Apparently, it’s the best way to spot whale sharks in these sea conditions. We saw a small eagle ray, a hawksbill turtle, a white-tip reef shark and large shoals of parrotfish, but still no whale shark.
Drag snorkelling along the reef
We had lunch, then cruised back to Dhigurah, stopping again in the lagoon for a snorkel. There were garden eels on the sandy bottom, but the visibility was poor. Where there were coral outcrops, they were teaming with fish and I was able to duck-dive to get amongst them for some photos. Shameel was busy in the late afternoon, so didn’t turn up for the data entry as planned. I managed to get it all done by the time he arrived.
Maldives Whale Shark Research Programme