June 30, 2015
I'm taking part in the Wildlife Trust's "30 Days Wild" campaign, trying to get involved with nature in some way every day of this month.

Day 22: A wet and windy day, stuck inside doing paperwork. I was getting a bit desperate for something wild to do today, but finally went down to the badger sett, put out some peanuts and grapes, and left the camera trap to see what happens. The badgers haven't had grapes before, so this is an experiment. Apparently they prefer seedless grapes. Next morning they'd taken the lot. 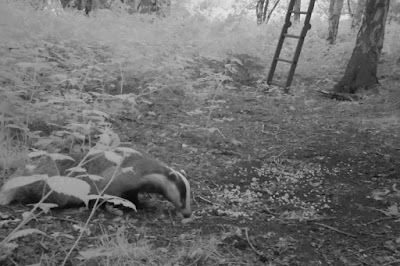 "Ah, you knew I preferred seedless!"

Day 23: I went to Fulford Ings today and did another four hours of Himalayan balsam pulling. The vegetation along the river bank has grown phenomenally in the last few weeks. A lot of the tansy which we planted two years ago, and which got sprayed with herbicide last year, has now made a remarkable recovery and is well established amongst the other vegetation. My clearing of the balsam wasn't as good last year and several patches which I missed are a lot bigger now. A few more visits during the course of the summer will be needed to finish them off. 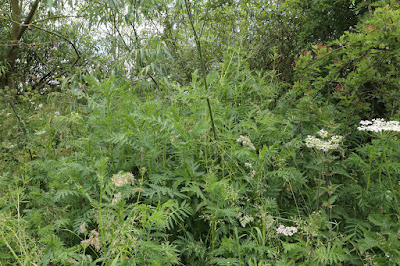 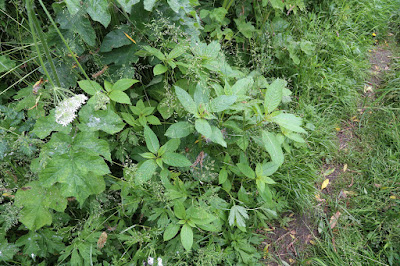 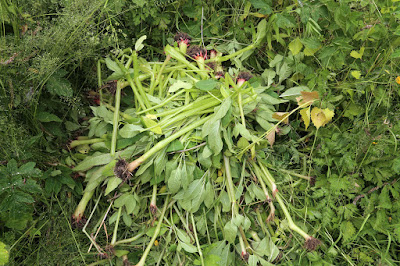 Out by the roots!

Day 24: Pulling plants out again, this time it was marsh ragwort in the flood-plain meadows of Wheldrake Ings nature reserve. Like the common ragwort, which flowers later, this plant is poisonous to livestock. We remove it so that a hay crop can be taken off in late summer, which will be suitable for winter feeding of livestock. Doing it by hand avoids the use of chemicals which would damage other plants. At this time of year, the meadow is full of wild flowers. It's a huge area, so the effect is stunning. Curlews call all the time and several leverets were seen running off into the long grass. 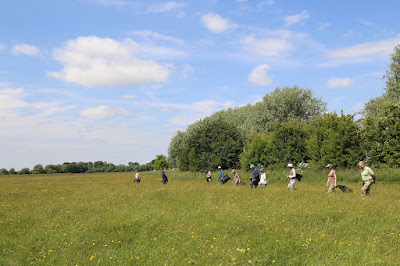 Setting off in line 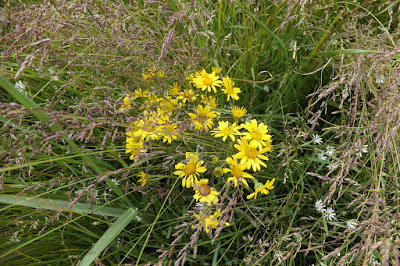 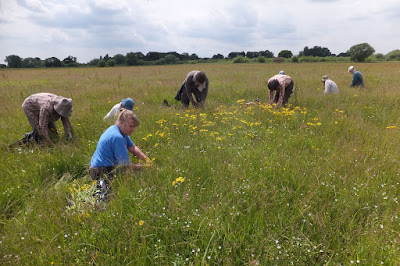 Day 25: A constructive day today. I was at North Cave Wetlands, helping to repair the steps leading up to one of the hides. At first, visiting birders just climbed over us, but eventually we had to close the hide as there were no steps! The replacements are made from offcuts of some decking, made from recycled plastic, so very environmentally friendly. 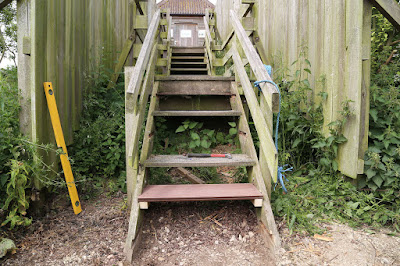 Taking it one step at a time 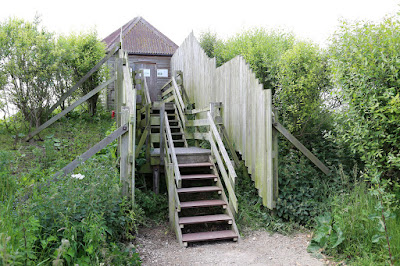 Day 26: I had a quiet day in the garden today. I found a dead mole, which was rather sad. It appeared to be in good condition and had no obvious injuries, though I suspect next-door's cat had got it. There are always lots of molehills in the field behind my house, but they rarely make an appearance in the garden. It puzzled me for some time that they never made molehills on my lawn, until I realised that the turf had been grown on fine nylon netting. It stops the turf falling apart when it's 'harvested', but also prevents moles burrowing through once it's lain. I buried the dead mole, which seemed appropriate, given its lifestyle. Later I came across a rather fine toad in the garden, which was very much alive. 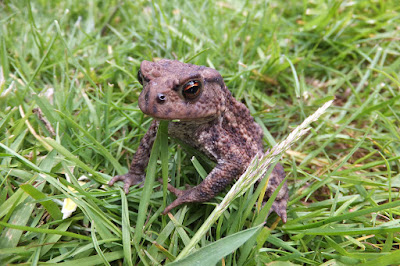 Toad in the garden

Day 27: Just another quiet day in the garden. It's deteriorated in recent years, so I'm gradually trying to improve it again, with the emphasis on making it a better wildlife garden. I've put in a lot of wildflowers this year, but as they are mainly biennial, it will be another year before I really see the result. It's been a sunny and relatively warm day, but there have been few insects in the garden - some bumblebees and a few hoverflies, but not as many as there should be. I found a rather nice spider in the pond. I think it's a Long-jawed orb weaver (Tetragnatha extensa), which is a fairly common species. 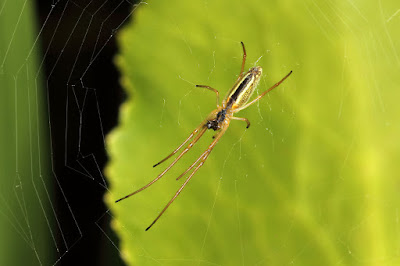 Day 28: Today was 'Wildlife Day' at Stillingfleet Lodge Gardens, with local wildlife organisations running demonstrations of bird-ringing, moth identification, owl pellet dissection, pond dipping and so on. The garden is arranged as a series of 'rooms', each with a very different feel to it. There is the formal rill garden, cottage gardens of amazing diversity, a woodland walk, wildlife pond and a lovely wildflower meadow. 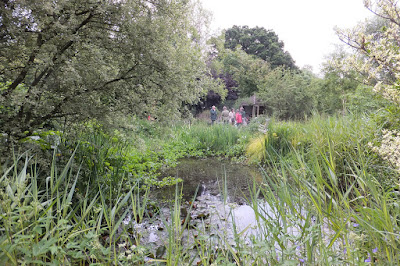 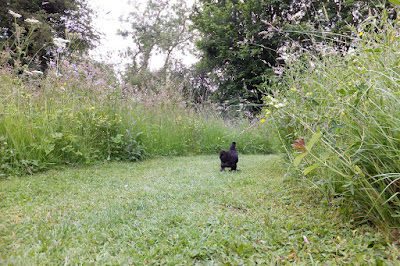 The owner told me how they had run it as a smallholding at first, but when their children had grown up they gradually converted different areas into the series of gardens they have today, which explains why they are all different shapes and sizes. I was interested in the 'avenue', which is a long rectangle of lawn with flower beds at each side. The lawn has unmown strips which are filled with crocuses, flowering in late winter, followed by a succession of wild flowers through the spring and summer. Pignut was looking good today. They cut it in late summer, leave the cuttings to dry out and then rake them off. It's something anyone could do on an otherwise boring lawn. 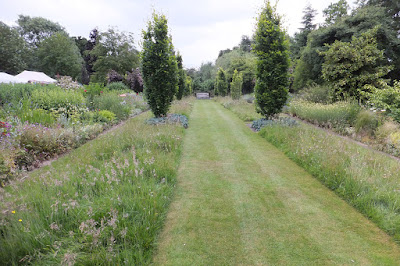 The avenue - mine won't be quite so long 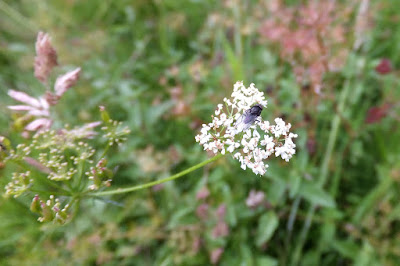 Day 29: I went down to Allerthorpe Common nature reserve for a recce to see what needs doing on our monthly work day next Sunday. Bracken is coming up, but we've been cutting it down for several years now and this has weakened it considerably. There is less to do this year in order to control it. There are lots of wildflowers out at the moment. Many are tiny and unspectacular, with yellow, blue or white flowers (Tormentil, Speedwell and Eyebright). Bigger and more spectacular are the common spotted-orchids, often growing with yellow rattle. 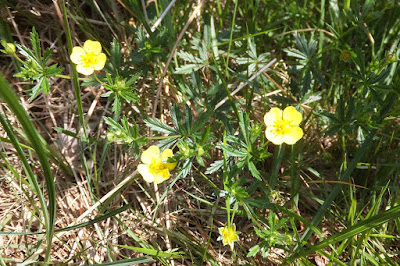 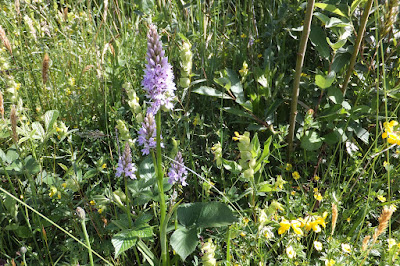 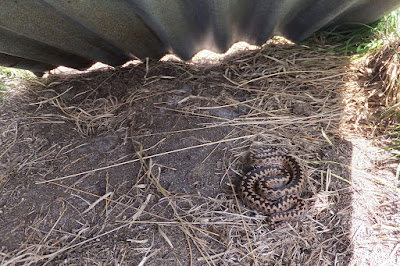 Adder warming under a tin sheet

Just one more day left to complete my "30 Days Wild" - watch this space...