June 22, 2015
I'm taking part in the Wildlife Trust's "30 Days Wild" campaign, trying to get involved with nature in some way every day of this month.

Day 15: I went back to Fulford Ings today, to top-up another of the tansy clumps we planted last August and enclose it in rabbit netting. Now that the Oxeye daisies are in flower, the meadow is looking magnificent. I pulled some Himalayan balsam, but the pollen count was off the scale, so I was forced to retreat before I'd got much done. 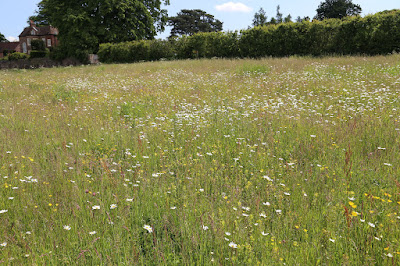 The meadow at Fulford Ings

Day 16: I spent another morning at Fulford Ings, putting in more tansy plants and my last two rings of rabbit netting. In the afternoon I planted more of the other wild flowers I've grown from seed in my garden, mainly Viper's-bugloss and Greater knapweed. 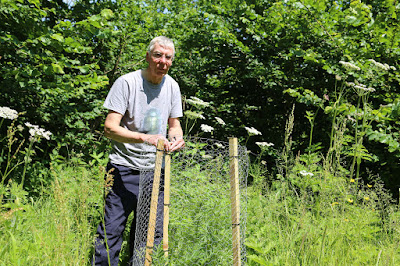 Day 17: This evening I went to a bat survey and roost count at Kexby Bridge, organised by the East Yorkshire Bat Group. Two other people turned up, but not the leader! Fortunately one of them had been there before and knew that Daubenton's bats had been roosting in a crevice in the stone structure of the old bridge. We watched as it got dark and although nothing appeared from the crevice, bats did start flying along the river and under the bridge. Some of these were apparently Daubenton's and some Common Pipistrelles. Both echolocate at 45 kHz, so I was able to listen in on my bat detector, although I couldn't tell the species apart. It was not possible to count the emerging bats as we couldn't see where the roost is now, but it was nice to see and hear them, hunting insects over the water.

Day 18: Today I went to a volunteer work day at North Newbald Becksies nature reserve. About five years ago, someone dumped their garden waste beside the reserve fence. It contained garden mint which has now spread into the reserve. Every year we spend a day pulling this invasive plant out, in order to protect the amazing floral diversity of the reserve. The Field Officer and I filled six bin bags of garden mint. He took some home to have with his new potatoes. We'll never eradicate it, but can only contain it and stop its spread across the reserve. 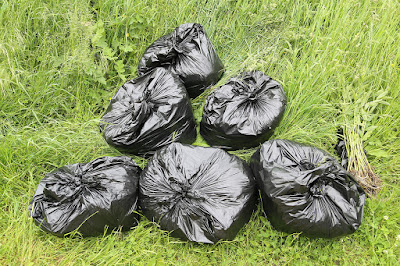 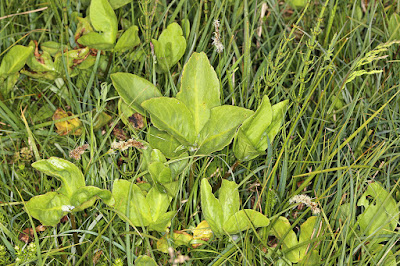 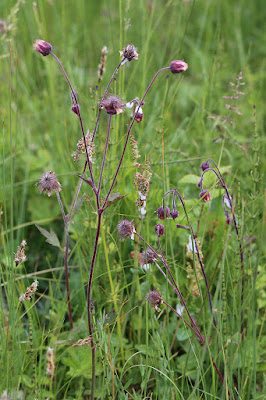 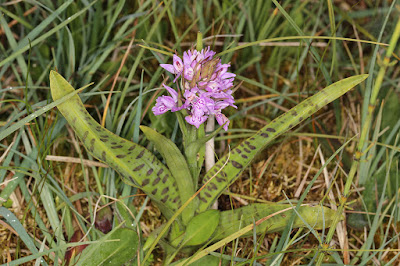 Day 19: I put a camera trap under the hanging seed feeder in my garden, to see what turned up during the night. Locking up before going to bed at around 11pm, I was pleased to see a hedgehog under the feeder, hoovering up the dropped bird seed. Next morning, the camera trap's memory card was full of hedgehog(s) coming and going throughout the night. 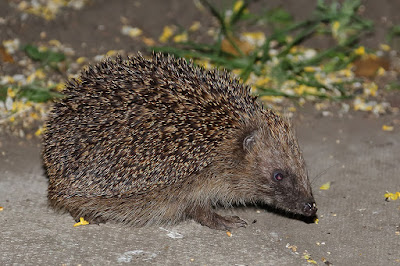 Day 20: I went back to Kexby Bridge, to record the bats echolocation calls and try filming the bats. The filming didn't work - although lots of moths and other insects showed up in the infrared light, the furry bats didn't!


Day 21: As the Yorkshire Wildlife Trust Field Officer has been away for the weekend, I've been checking the sheep which are 'conservation grazing' on Calley Heath nature reserve. I first have to count them - 42 all milling around - then make sure none are limping or have 'fly strike' or any other problems. Thankfully, they were all OK this morning. 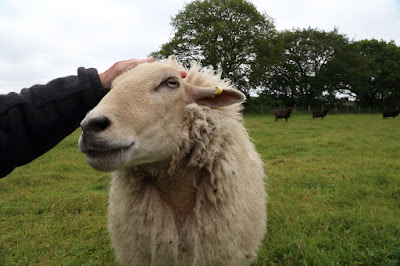