Autumn Update from the Badger Sett

October 06, 2015
The badgers I watch had no cubs this year, so it's been very quiet around the sett. During the summer they lost interest in peanuts. I saw them coming out and setting off across the wood or into the fields, but they stopped coming to the food I was putting out. I hoped this was because natural foods were in good supply and they had no need of my supplementary feeding. Next morning of course, the food was gone, but they'd taken it at two or three in the morning, long after I'd given up watching.

Over the last couple of weeks I've been putting food out again and now they're showing more interest, coming to it as soon as they emerge in the evening. At this time of year it's almost totally dark by the time they emerge, so really all I can see is the flip-out screen on my camcorder, with its infrared light illuminating the badgers. 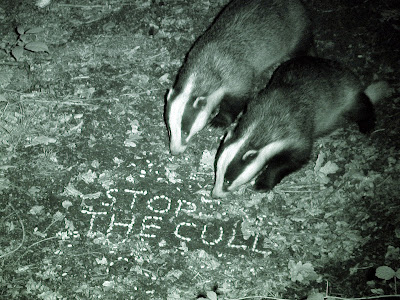 A message from the badgers for National Badger Day

I had a simple idea for a short film for National Badger Day. Badgers are never very good at following a script, but I thought it was worth giving it a try...